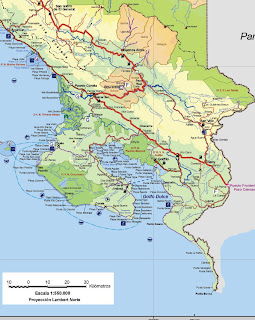 Corcovado National Park is the heart of Costa Rica.   National Geographic called it "the most biologically intense place on earth."  Pristine rain forests, packed with wildlife, and beautiful scenery.      But just getting to Corcovado is the real adventure.

So there I was, standing outside the Tracopa bus station in downtown San Jose, at 4:15 am, waiting outside a locked building, waiting to catch a 5am bus to Palmar Norte.  The only other people on the street was a homeless guy sleeping next to me and a prostitute.  I could think of a worse selection.   Even the guard dogs on the other side of the bars,  seemed to realize I shouldn't be out at that time.

I was there to catch the bus  to Palmar Norte, in southern Costa Rica, along the Pan American Highway.  Wasn't sure were the bus station was located so I left a little early from my hotel.  I'm always early to things, I was the guy in high school showing up to dances when the doors opened up.  I was ready to dance.

Eight hours later,  the bus I caught in San Jose, arrived in Palmar Norte.  Even though it was a long bus ride I got very little sleep.  The scenery along the way is stunning.   The Pan American Highway takes you over some rugged landscape blanketed in thick rain forest.

In Palmar Norte,  I had to find out how to get to Sierpe.  I walked around asking people in my broken Spanish, where I could catch a bus to Sierpe.   I was directed to a run down school bus, sitting outside a restaurant.   I jumped on and asked ask a guy, "Sierpe"? with my thumbs up.   He answered, "Si"  We waited about 30 minutes as it was loaded up with supplies,  school kids, and vendors selling food.  Then we departed.

It only took about one hour to get to Sierpe.   The small town sits right on the Sierpe river, which drains into the Pacific.    This town is the gate way to Drake, which is the Pacific gate to Corcovado National Park.

It was 1 p.m  when I arrived to where I was going to catch the water taxi down the Sierpe River to the Pacific Ocean.  The taxi wasn't leaving till 3:30. so I had some time kill.   So I sat in the Las Vegas Restaurant ordered some food and drank some beer.    The time went by fast, a crocodile broke the surface of the water with a fish in his mouth.   Two Scarlet Macaws,  flew over the river and landed outside the restaurant.   I followed them through town, since they were the first scarlet macaws I had ever seen.

Luckily the water taxi was late.   Because I was too busy photographing the scarlet macaws to realize it was 3:40. 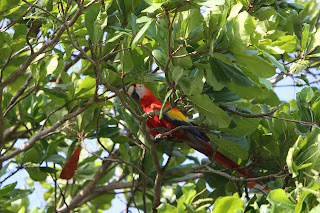 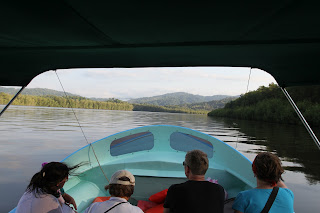 The water taxi down the Sierpe River, is a fast moving river boat.  The trips takes you through beautiful mangroves and breath taking rainforest. 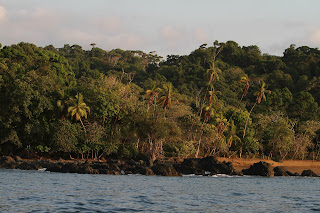 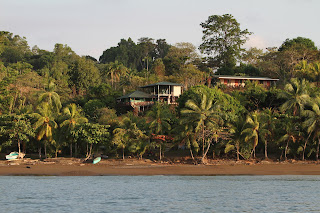 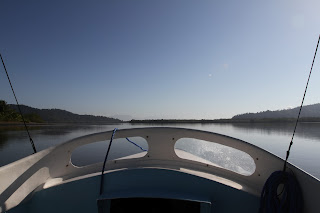 The taxi ride to Drake was about 25 dollars and took over an hour,  but it was well worth the price.  You pass by beautiful mangroves,  lush rain forests, and pass the most pristine landscapes I had seen in Costa Rica. 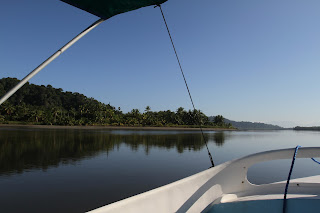 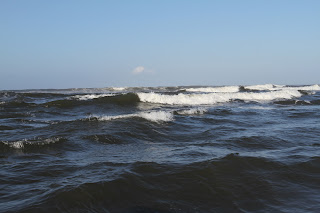 The most adventurous part of the journey is entering the mouth of Sierpe River where it meets the Pacific Ocean.   The small river boat has to navigate through rough ocean swells and breaking waves, to make it out into the open ocean.     The cheap life preservers don't make you feel very safe.   Because  capsizing is only the beginning of your fears.  Lurking in the muddy river mouth is a large number of bull sharks.   If our engine died we would have been in a world of hurt. I didn't want to think what would have happened. 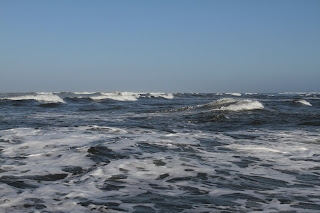 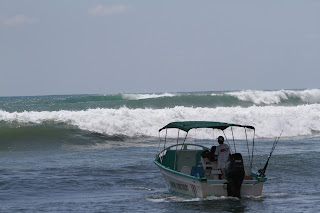 The driver threaded the needle through some rocky outcrops and got me out into the open pacific.   (Watch the video below. )   Traveling along the ship wrecked coastline, I finally felt like I escaped the crowds of Costa Rica.   I was hoping there were places still left where you felt like you were away from people.    The coastline to Drake is really stunning.

Arriving to Drake I was asked by the driver where I was staying. I said," Costa Rica Tent Camp."  Remembering the title from the heading on my email.  He looked at me with a confused look, I immediately knew what that meant.   He asked in Spanish to another captain in another boat.  He shook his head as well.  Then the captain pointed me onto another boat and once again I was off.   I guess it meant, I wasn't his problem so he passed me on to another captain.

We headed away from Drake and out along the breathtaking coastline.  In my head I remember the email telling me the place was right in the town of Drake.   But I sat back and welcomed the spontaneous thrill of not knowing where I was headed. It was a free boat ride along the coast and the setting sun was putting on a great show.  So I enjoyed it!

It was far from being the first time, I jumped onto a random boat and didn't have any clue as where I was headed.    When I was in Brazil,  on the Amazon River near Manaus, I jumped onto a boat heading up the Rio Negro.  After many hours and over two hundred miles I was dropped off in some back tributary, with a family who lived in a small  hut in the rain forest.

There was a guy on the boat who knew some English. He laughed at me when we pulled up to the bank, and told me, "this is either going to be the most amazing experience of your life or the worst. "   The captain waved to me as he headed further up river, and was yelling at him, Domingo Domingo, meaning Sunday,  making sure he knew to pick me up on Sunday on, his way down river.     I turned around and looked at this hut on the bank and couldn't help but laugh.   It ended up being one of the most amazing experiences of my life.  Where I slowly gained the trust of the family who I couldn't communicate with and the father took me in a dug out canoe, fishing and exploring in the rain forest for three nights.    But that is another story.

This time my lodging ended up being much nicer and much less exotic.  The captain pulled me up to this isolated beach, tucked into the mountains.   I jumped off and walked up the beach to a sign that said Corcovado Tent Camp.

I was greeted by an American guy who was running the camp, "Can I help you?"  I replied, " Is this Costa Rica Tent Camp"?

He shook his head, never heard of it.  I replied, well do you have any any vacancy?"   He laughed and said, " we are usually fully booked, but you are lucky we have one tent open.    He took me to the my tent and told me about the tent camp rules and tour that was leaving for Corcovado the next morning, and how dinner was being served in ten minutes.  I unpacked my bags,  walked to dinner and had a great meal, had a great time staying at the place,  and got to experience world class Corcovado National Park.
Link to Corcovado Tent Camp 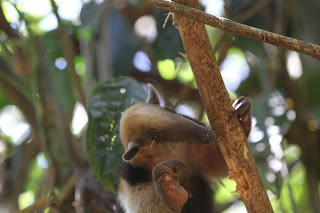 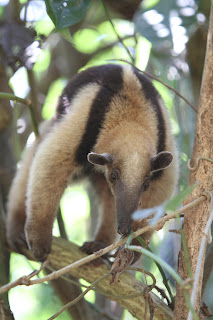 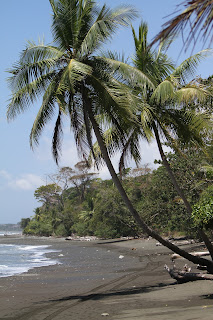 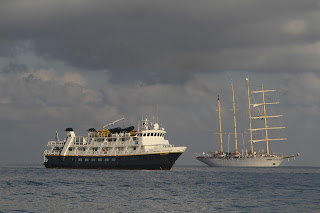 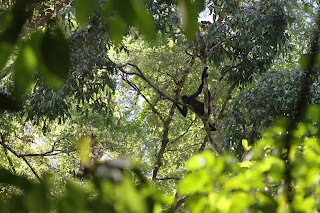 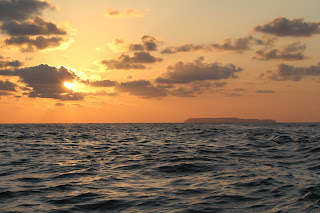 Sunset with Cano Island in the distance. 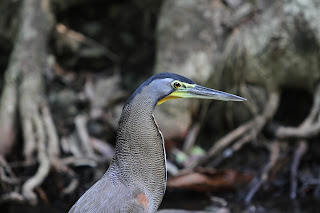 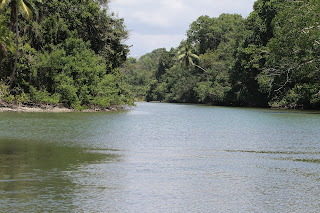 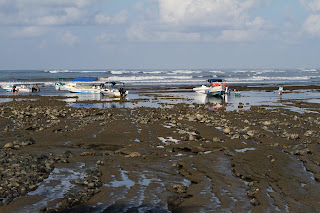 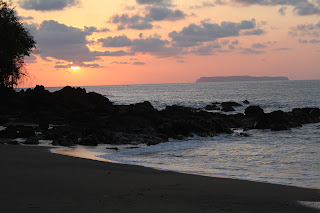 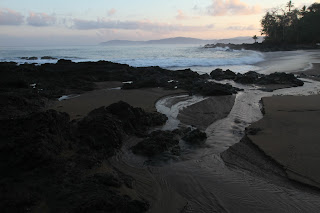 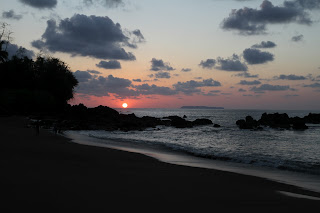 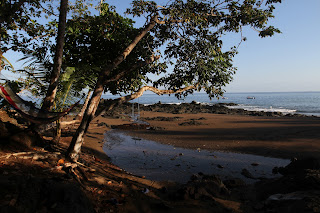 Posted by Beyond Adventure at 3:08 PM