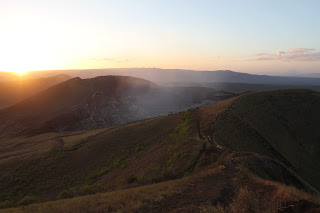 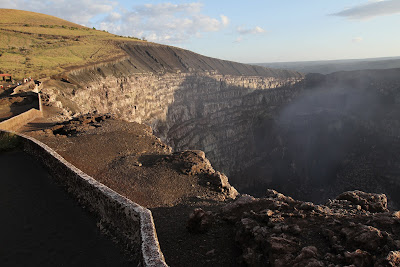 I decided to go visit Masaya Volcano just to kill some time, while I was staying in Granada, Nicaragua.   But it turned out to be an amazing experience, I will never forget.   When ever I get a chance to stand next to an active crater, I will definitely jump at the chance. Back home it would  take a real trek to get up close to an active crater.  Let along permits.

Located near the town of Masaya,  the volcano is a great chance to experience what happens inside the crater of an active volcano.   You can get just about as close to this crater as you possibly could, without falling in.    Don't stay at the edge too long or that's just what might happen.

Masaya Volcano was described by the early Spaniards as the gates of hell. It has had some major eruptions in the past few centuries, and still erupts every few years.   The Spaniards actually built a large cross, near the crater edge, because the local Indians, used to sacrifice people by throwing them into the crater. The cross was to control the exorcism. A cross stands today in the same spot. Some unlucky or lucky visitors have gotten an up close experience of smaller eruptions.

The crater is a huge steaming, gas emitting, sulphur smelling,  hole into the depths of the earth. So what does the Nicaragua government do.  They make it a National Park, and let visitors drive right up to the craters, edge.    I love it!

Masaya is the most accessible volcanic crater in Nicaragua.  Just hire a guide and find a way to get up to the craters edge and you will find yourself so close to the molten lave below that, parts of the overlook have collapsed into to the crater.  The park rangers advise you not to spend more than twenty minutes at the craters edge because an eruption or landslide can happen at any minute.

My guide was about a chill as any guide I have had. He let me run around taking photos with my tripod, not even carrying how close to the edge I got.   I even walked passed  closed sections, with a big sign saying do not enter, and which have collapsed into the crater,  and let me stand right above the molten lava below,

While I was standing inches from the edge, taking photos, in a closed section, because I wanted to capture the seeting sun along the rim of the crater .   A big burst of gas smoke, came up from the crater and engulfed me. I had to run from  the craters edge, my eyes were burning,  I couldn't breath and my skin felt like it was on fire.  It was a good reality check, of just how nasty the gas coming out of a volcano is and to listen to directions.

It's an amazing experience to stand at a craters edge and look down into a  rumbling,  steaming, molten lava pit.    There are an average of thirty tremors a day, so things are always moving.     You find yourself a little jumpy around the crater.  Always ready to make a run for it.   I was told by my guide that 12 tourists died in the very spot, I was standing,  when an explosion of gas came from the crater and overwhelmed them.  Killing them where they stood.

In 2001 visitors at the craters edge were provided an up close education on what happens in volcanic craters, as molten rock starting being ejected from the crater and falling all around them.   This video on You Tube,  captures a small eruption that happened in 2008.  It shows tourist racing back to their cars, as a small eruption begins.    My guide warned me,  if the gas and smoke stops coming out of the crater then run back to the vehicle. It  means the opening has been plugged up and pressure is building. It's the only warning they have discovered that lets them know their will be an eruption.   Luckily or unluckily, the gas and smoke kept coming, so there was no eruption for me.


Just say you could never find this kind of tourist experience back home in the United States.   Only thing close to this might be a geyser or hot springs at Yellowstone National Park.

But this is Nicaragua.   And I love how they let you live your life.

Here are some of the park rules:

-Park you car backwards or facing exit in parking lot near crater edge, so in an emergency"meaning eruption" or can speed away quickly.

-An active crater can present any phenomena without warning, such as Gas emissions, expulsions of rocks, sand, ashes, and others.  We let you know that gases can irritate your eyes, and respiratory tract; affect asthmatic people, and lessen the visibility in the areas. Keep away from the area when it happens.

-Echo Balcony Look-Out is closed because of being a landslid area and emits heavy dangerous gas.  (That's were I was standing, when the gas engulfed me.

-Spend 20 minutes in crater area, especially if you come with children.

-In case of rock expulsions, you can protect yourself under your car.


If standing at the edge of an active crater isn't exciting enough.   Ask you guide to take you back into the lave tubes at night.  With only a hard helmet and flash light, you explore lava tubes, and get the experience of watching 35,000 bats, fly by you on their way to the opening of the cave.

Once you exit the cave,  you walk back to the crater edge and look down in the glowing red crater.  Get a sense of how hot it is down there.   It really looks like the gate to hell.
Posted by Beyond Adventure at 6:20 PM