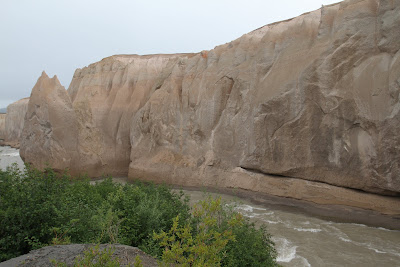 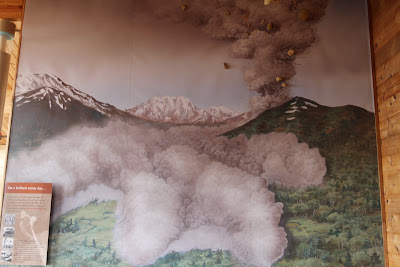 A brown bear makes his way along the river bank, stopping to eat grasses and roots. He looks forward to the first salmon making their way upriver.

A giant moose is grazing on the green shoots sprouting up, where the winter snow has melted. A wolf, trots up the valley looking to catch a ground squirrel off guard, before he sends out a warning to others and they all run into their burrow. A beaver swims across one of the many kettle ponds, with a newly chewed stick to add to his grand lodge.

At the base of a valley, a village of Alaska Natives, prepare for the abundance of the upcoming sockeye salmon run. The June day is peaceful and quiet.

Deep below the ground, the magma begins to push upwards towards the surface. Pressure builds like a shaken carbonated soda, straining the already fractured earth's crust. The earth begins to shake as the magma rumbles inside the chamber.

When the shaking stops, the villagers at the base of the valley, go about their business as before. But a worried look grows on the elders. The spirits in the mountains have been very angry lately and the increase in the earth trembling, makes them sense there might be danger looming.

Growing up, their elders used to tell them about stories passed down through generations, about such events in the past, that brought pain and suffering to their people. Events that shook the earth, turned day into night, and rained hot earth from the sky. A leader of the village decides to hike up a nearby mountain, to see if he can spot any danger.

Hours later, as he makes his way up the steepest part of the mountain the shaking begins again. Looking up the valley, Mt. Katmai's snow capped peak is visible in the distance, much larger than the rest. Then there is an explosion so massive and loud, that it knocks him to the ground. The dazed man, gets to his feet with ringing in his ear drums, similar to having an artillery shell explode near him. His mind races as he is one of the only few witnesses to one of the largest eruption in recorded history.

He races down from his outlook and back to his village to warn the others. In the distance, the ash raises into the sky, another blast sends an avalanche of molten earth racing down the valley at hundreds of mile per hour.

The warned villagers runs, to the lakeside, jump into their man made boats and kayaks, and paddle as fast as they can, out into Lliuk Arm, towards the larger Naknek Lake. Just as their ancestors had done before, they abandon their village all together.

They don't have much time, because a pyroclastic flow, 30 times bigger than the eruption at Mt.Saint Helen's, is on it's way, flash boiling the kettle ponds, lakes, knocking down every tree in it's path like some nuclear blast, and even damaging surrounding mountains.

Jump four years to 1916, a group of explorers are walking their way up a valley that looks nothing like before. Steam is rising all around them, chunks of mountain crash down towards the valley floor, what was once a lush valley, is now blanketed with ash, 700 feet thick.

Sent by the National Geographic society, they are exploring and studying the aftermath of one of the biggest eruptions in history. They are late studying the eruption, since the world was distracted by the more popular event of the sinking of the Titanic in 1912. But, even four years later the place is still an inferno.

Robert Griggs, leader of the expedition into the valley, writes about his experience with a famous quote.

"The valley as far as the eye could reach, was full of hundreds, no thousands, literally ten thousands of smokes curling up from its fissured floor. It was as though all the steam engines of the world, assembled together, had popped their safety valves at once and were letting off steam in concert."

At first they think Mt. Katmai is the cause of the eruption, since only a crater is left where a mountain once stood. But they later discover a new crater, Novarupta, and it's lava dome, formed, where 3 cubic miles of mountain once stood. The surrounding mountains are baked and damaged, sections still crumble and fall, one being named falling mountain, the other broken mountain.

Jump a head almost a century, and I'm exploring the valley for the first time. Alone, I walk up the valley and am blown away by what I see. The isolation of the place means I don't come across another soul. The valley has cooled, Novarupta is sleeping, and only a few of the ten thousands of smokes remain at the head of the valley, but it still looks as if I am walking across a new eruption. Not much vegetation has grown, but the rivers have carved deep canyons in the deep ash, making it near impossible to cross the valley. 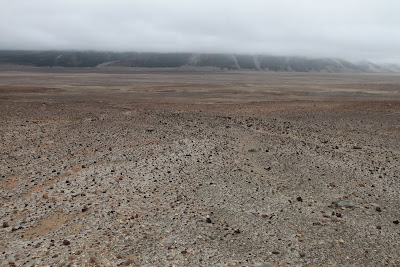 I feel like I'm walking across the surface of Mars. Polychrome ash, pumice, and dark volcanic rock is scattered across a flat landscape. You could describe it as hell's kingdom, a unforgiving place, with very little life. Strong winds can shred your tent, and blow ash into your eyes, rains and melting glaciers rise surrounding creeks quickly, and make them hard to cross. Isolation means you must be prepared to save yourself. 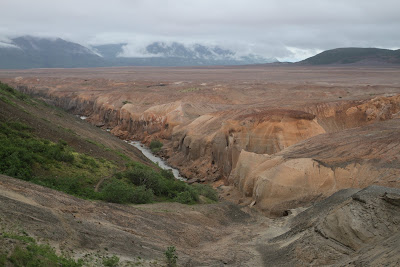 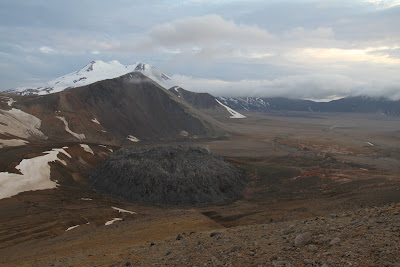 At the epicenter of the devastated landscape, lies Novarupta Dome. A beaver lodge looking, pile of fractured lava that had ouzed out of the crater and still steams, like smoke coming out of the chimney of the devil's castle.
Novarupta erupted in june of 1912, displacing 3 cublic miles of earth. Compare that with .1 cubic miles that happend with Mt. St.Helens. or 2 cublic Miles that Happened with Krakatoa and Vesuvius, and you can sense how big this eruption was. The importance of the eruption helped protect the surround land and create Katmai National Park.

The eruption was so loud that it was heard in Juneau, the equvilant distance between Chicago and New York City. The eruption sent so much ash into the atmosphere that it cooled the earths temperature by one degree, dusted Seattle, tarnished brass in california, and choked the air, on the Island of Kodiak, 90 miles away, that locals couldn't see lanterns, in their out reached hands. 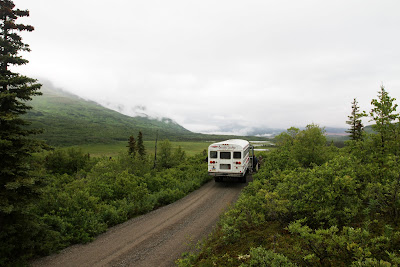 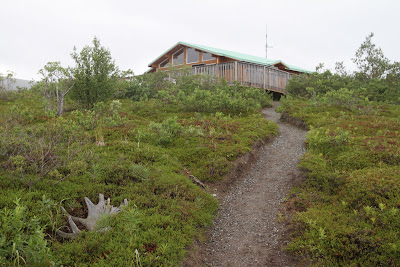 Today a tour bus takes visitors from Brooks Lodge, back to the base of the valley and stops at a visitor center that looks out over the Valley of Ten thousand Smokes. An optional guided hike by a park ranger, takes you on a three mile round trip, hike down into the valley and along side the ash flow. You can stand upclose and admire how much destruction the massive pyroclasic flow, created.

Those more adventurous can be dropped off and can hike back into the valley, allowing you to get an upclose sense of the size and magnitude of the eruption. Be prepared, because the Isolation means you better bring relable camping equipment.
The reward is experiencing a landscape that few have ever seen and is very photogenic in it's appearance. Active volcanos surround you as you traverse the head of the valley and gaze at the steaming mother of all volcano's. Hopefully you are nowhere close, when she desides to wake up.


Link to more photos of Valley on my photography website.

Posted by Beyond Adventure at 3:48 PM