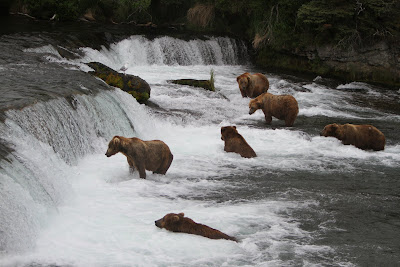 As I start into the woods, and head down the narrow path towards Brooks River, I scan the woods for movement. The trees are thick, and the forest is dark, but it's easy to see deep into the forest, because of the lack of undergrowth. There have been many times that I have walked this path and have come face to face with a huge Alaskan bear or two running down the trail. This time, I'm not that lucky.

Even before I get close to the falls, I start hearing the deep roars of some of the biggest bears on the planet, fighting for prime fishing spots. Any other time or place and the sound would send chills down your spine, and you heading quickly in the opposite direction. The sound is pretty intimidating.

This stretch is one of the most exciting places to walk, since bears are always coming and going from the falls. At any moment you can run into a bear. I've been walking along this stretch, behind a girl all dressed up. She flew to the falls for just a day trip.

Out of nowhere a smaller bear came running down the trail at full speed with a salmon in his mouth, followed by a much bigger bear. She froze right in the trail and wouldn't move, lucky the bears ran right around her and didn't just plow her down like bulldozers. It was her first experience seeing a bear. The look on her face was priceless.

Once you reach the falls. You can choose two platforms to photograph fishing bears. A lower one gives you a view of Brooks River and the falls from a distance. The second, and more popular, is directly next to the falls and allows people to watch the action close up

The falls platform, is an amazing place to photograph brown bears. It is one of those unique places around the world, that leaves you with an experience that you will never forget. When the fish are running you can see up to 25 brown bears at the falls, fighting over the best fishing holes.

While the big males fight down below using their size to intimidate others, there is a battle on the platform between photographers.

Tourists with small point and shoot cameras, often move out of the way for photographers with huge 800 mm lenses and thousand dollar cameras. It's funny to watch.

If you decide to visit Brooks Falls, spend sometime getting to know the bears. Each has a distinct personality, and each has earned his spot at the falls. Each scare on their back tells the story of a battle won or lost. After a few days you turn into a spectator, and cheer on your favorite bear. My favorite is Oatis who I've photographed two years now fishing below the falls. 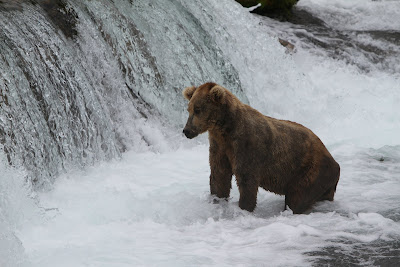 Oatis, a large male can always be found underneath the falls. He was named after a dog because he stands still and just stares at the falls like a dog waiting for a ball to be thrown to him. When the fish are thick he catches a lot of them.

Gangus, is a huge male who has fought for the right to sit in the "jacuzzi" and let the fish come to him. He looks like an old man relaxing in a jacuzzi, since only his head is out of the water.
Cinnamon is one of the oldest bears ever in the history of Katmai National Park. If he returns to the falls next year, he will be 31. Male brown bears rarely live into their late 20's. He was looking very old this year. Bones showing through his skin. But he looked like that last year and survived the winter. 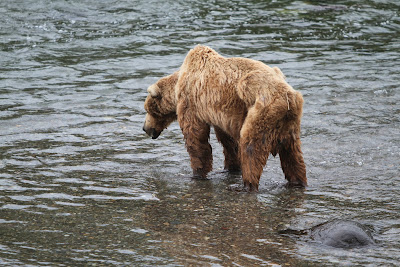 Cinnamin in 2011 watching the action next to the falls. He used to be one of the dominant males, but his age has kept him from being able to compete with younger stronger males. If he returns next summer he will be the oldest bear in the history of Katmai. He is 30 years old. 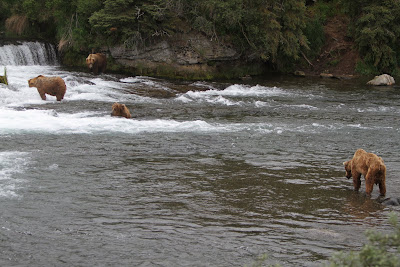 People think animals don't have compassion. The bigger males could easily chase away or kill cinnamon. But they tolerate him as if showing respect to their elders. I even saw bears allow cinnamon to eat fish caught at the falls. 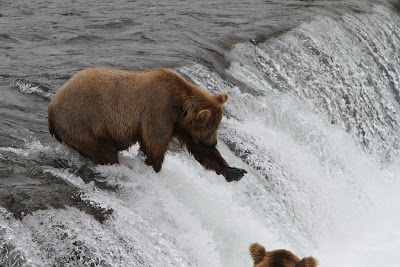 This bear is a famous bear. He has learned to catch fish from the falls, and is in a lot of famous photographs about Brooks Falls. 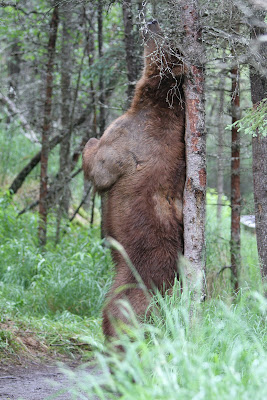 Bear using a tree as an itching post. This bear's nose is probably ten feet high. 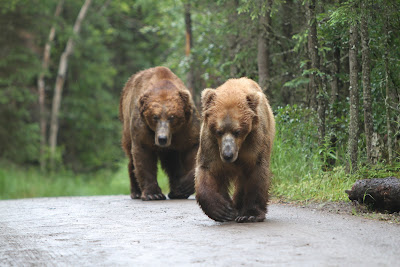 This male and female had been mating, so when they walk down the road towards the falls, you make sure to get out of their way. 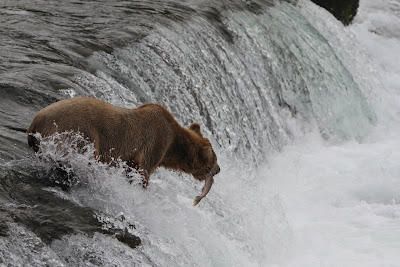 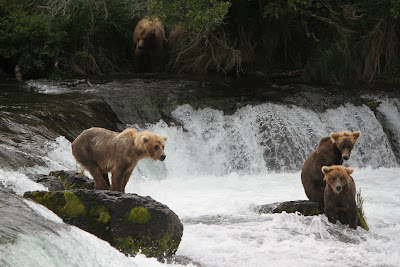 Flo and her 2 year old cubs. They were nick named the "terrible two's" They were famous for using their numbers to their advantage and bully other bears out of their fish. 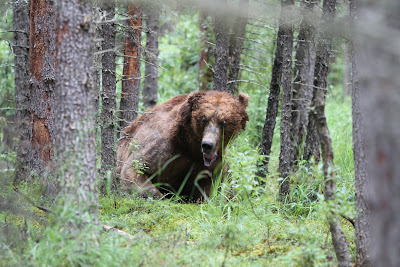 Does a bear sleep in the woods? 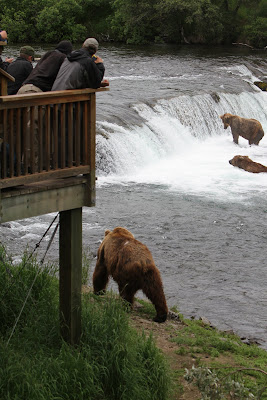 Visitors on the platform. Oatis is focused on the falls. And Gangus is relaxing in the Jacuzzi. 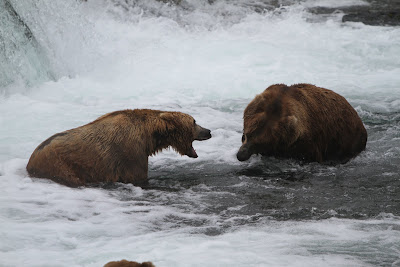 "hey this is my fishing hole, buddy, move it." 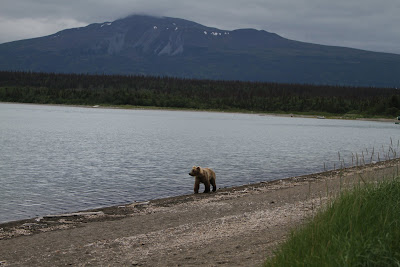 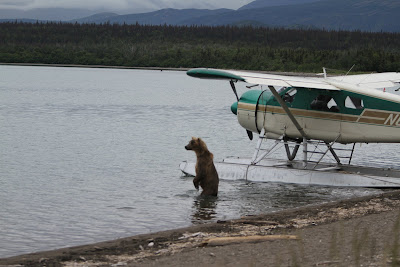 Posted by Beyond Adventure at 1:13 PM