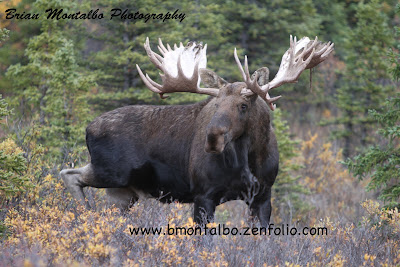 Photos of large moose and other Alaskan Animals


I slowly stalk my way through the tall willows, trying not to get my backpack and camera equipment entangled in the jungle like mix of bushes and swamp. A low mist hovers above the ground like a scene in a horror movie, hiding a monster that I am hunting. The temperature is around freezing, making my breath look like smoke, and blankets the willows with a layer of frost that soaks my clothing.

The willows tower over my 6'5 frame, making it seem as if I'm walking through an endless maze. Everything you are taught about hiking in Alaska, I am ignoring. I'm walking through tall vegetation, not making any noise, hiking alone, and not caring a gun or bear spray.

But I am relying on my many years of experience hiking in the back country, to keep me safe. While encountering a bear in this dense vegetation could turn deadly, the reward of getting up close to this trophy is well worth the danger.

Photographing these amazing animals is an experience I look forward to every fall. I'm not here to shot and kill these animals. Rather I'm a trophy hunter, with a camera. Who would rather shoot these studs, with a camera instead of a gun. To hang a photograph of them on my wall, to me is more rewarding than a moose head. 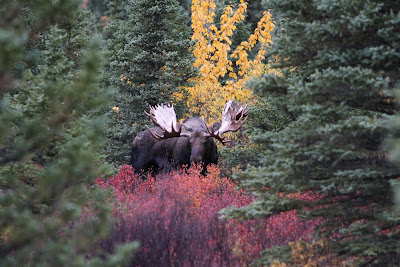 Alces alces or more commonly known as the "Moose," stands 7-8 feet tall at the shoulders, weighs up to 1600 pounds, and have antlers that grow up to 84 inches wide.

There are seven subspecies of Moose.


Alaskan moose:  is the largest subspecies of moose  and largest member of the deer family in the world.   Found in Alaska and west Yukon, Canada.


Standing face to face with an Alaskan bull moose is like standing in front of a Clydesdale horse. But this animal isn't pulling a wagon full of beer. There is no Anheuser-Busch, but rather a wild animal with a bad temper and two satellite dish sized weapons attached to his head. No other member of the deer family can rival the size and strength of the moose. 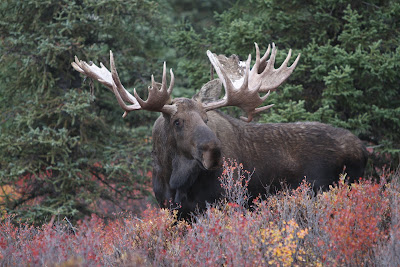 Like fingerprints, every bull moose has his own unique set of antlers. This huge bull had a really interesting set. 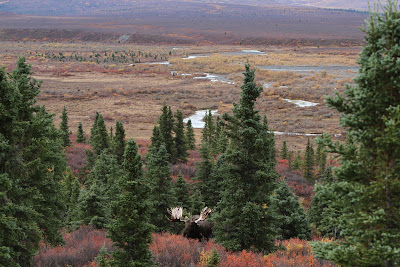 When bull moose loose their velvet,  they are easy to spot across valleys.  Their antlers stand out like two white flags.   Not good for them during hunting season. 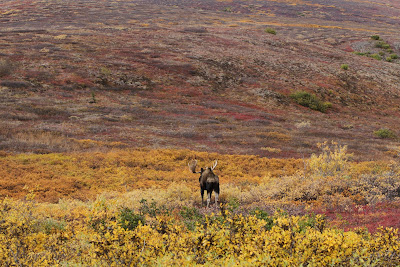 Average bull moose walking down a small valley.   Lone bulls who loose fights with more dominant bulls, have to look forward to the future, when they are big enough to win battles. 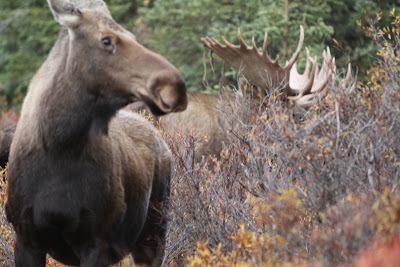 Getting between a bull and his cow's can turn into a dangerous situation. Moose can run 40 miles per hour and have a kick that can kill a brown bear. 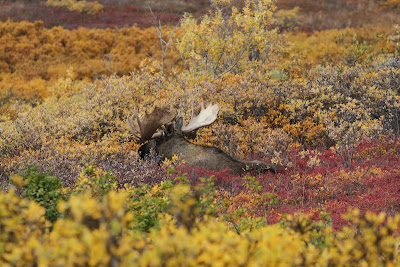 Interesting Fact: If a bull moose is castrated, either by accident or other means, he will shed his antlers quickly  and start growing a new set of deformed antlers.    He will never shed these antlers for the rest of his life.    Native Indians  used to call them,  "devil's antlers." 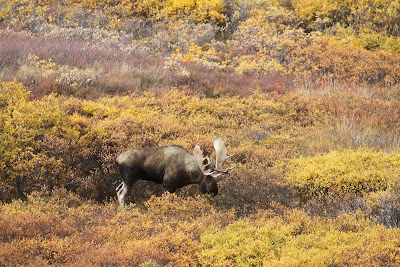 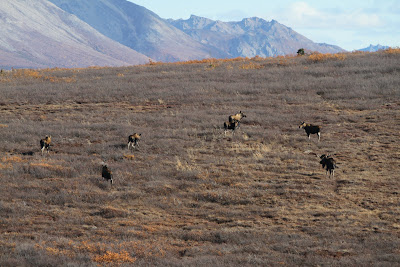 In the fall Moose gather in what is called the rut. Big bulls battle each other for the right to mate with the females or cows.   Moose are generally solitary animals, besides mother and calf,  and during the rutting season, where moose will gather looking for mates.   This big male must be popular among the ladies.

Photos of large moose and other Alaskan Animals

Posted by Beyond Adventure at 1:46 PM