Ometepe Island And The Fresh Water Monster That Lurks Off Her Shores. 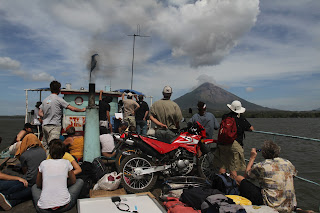 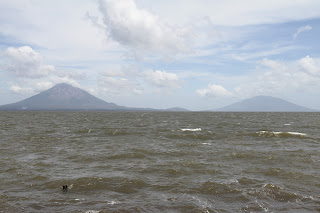 From a distance, Ometepe Island  stands out like a double humped camel with it's head in the water.   The word Ometepe, means two mountains.  Two towering volcanoes rise from the island, Maderas Volcano is to the south and Volcano Concepcion is to the north.

Concepcion is one of the most symmetrical volcanoes you will find, a Nicaraguan version of Mt. Fuji. The volcano is 5200 feet tall, but without snow.  It's probably the most popular volcano displayed in travel books and magazines about Nicaragua.

The easiest way to get to Ometepe is the take a ferry from San Jorge.   Just hop on a bus to Rivas from Granada and then take a cheap taxi right to the ferry.  Boats leave every hour or so, and range in different sizes.

You can catch a ferry in Granada, but it only leaves Mondays and Thursdays and takes three hours to arrive at Ometepe.

The ferry I took was a slow moving wooden, tug of a boat, with a smokey stack, that covered you in exhaust.    Riding on the rickety, bobbing, boat, I really expected at any moment, to find Popeye behind the wheel.  Pipe in mouth, huge forearms, a can of spinach or two laying around, just in case we get into trouble,  and singing the sailor man song, with a Popeye laugh.

It the old days, making the long crossing to Ometepe,  would have been a little more adventurous and scary.  There was a time when the locals didn't dare swim or wade into Lake Nicaragua.  For the fear of the man eater that lurked and patrolled the waters.

To my knowledge Lake Nicaragua, is the only place in the world, that has fresh water sharks.  The local bull sharks are unique in that they can live in freshwater and saltwater.   Bull sharks have been known to swim far up rivers, one was caught 800 miles up the Mississippi River, so I'm sure bull sharks can be found in other lakes around the world, but may not live year round in them like they do in Lake Nicaragua.

Before the Japanese and Koreans discovered the place, there used to be thousands of  fresh water bull sharks in the lake.   The shark fin market  killed off almost all of them.   There was a factory that processed the sharks that were killed on the shores near Granada.  An estimated 20,000 bull sharks were killed during it's short operation.

Today it's only a rumor that sharks still survive.  Allowing you the sense of security to wade into the murky lake, but not swim to far out.  I talked to some locals and they hadn't seen a shark for the last 14 years.   They used to catch them right from beach at Ometepe.    But they said they still existed out there in the depth, or maybe just their imagination.   I read in books, that a few still live near the mouth of San Juan River.

If crossing a lake with fresh water sharks, doesn't  capture your imagination, then arriving at Ometepe should.  The ferry gives you a great panorama view over the lake at more than just the volcanoes on Ometepe.

The closer you get to Ometepe the taller the two volcanoes seem.   Just before you dock at Mayogulpa,  Volcano Conception is towering above you, like some sky scrapper in Dubai.   The top still active and smoking, the west side ripped apart and full of gullies and canyons where the most recent eruptions have occurred.   I took one look at the mountain and asked the guy next to me if it's possible to climb.  "Si senor"


Video I took from a flip cam, crossing from Ometepe back to the mainland.

There once was a time when the island had more monkeys than people.  But now the 20,000 howler and white faced Chapuchin Monkeys, are the minority.   But still you are awaken by a chorus of howlers calling the in the trees.  Which makes the island a fun and unique place to visit.

Posted by Beyond Adventure at 6:21 AM