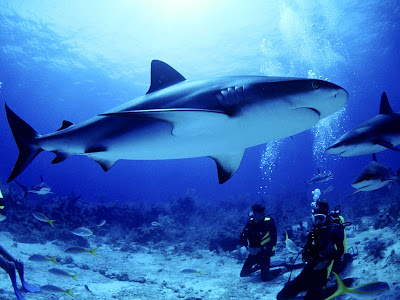 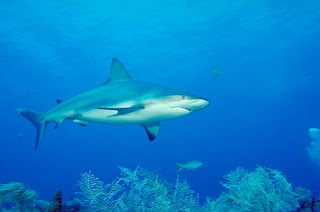 Photos of Caribbean Reef Sharks from the Internet.

The thing I love most about traveling, is the unknown.   You have no idea what tomorrow will bring, no idea what you will experience next.  Nothing is better than doing something totally unexpected that turns out to be a unforgettable experience.

I personally,  like to avoid cookie cutter tour companies.  They are run by companies with a stock market mentality, which focuses on profit rather than providing a memorable experience.    I've done enough dives with companies only to have the experience ruined by some burned out dive master who isn't having fun at what he does anymore, because he has to baby sit 20 other divers, who scare away all the fish, can't control their buoyancy, and are kicking around knocking peoples masks off.

My girlfriend and I were completely happy just snorkeling from the shore, if we didn't find one that we liked.  The reef is so good, you see lots of fish, lobster, and eels right off the beach.

On the second night, we were just hanging out listening to a band play in a bar called Beaches, on West  Bay.   The band was called West End Players. The lead singer was named Bryon James, who had toured with Bon Jovi.

We started talking to the drummers nephew, who mentioned that his uncle was a dive master.   And said that he has his own dive company.  It grabbed my attention because I love going with companies that aren't attached to resorts or hotels.  I knew the guy would be fun if he was in a band.

We  met Konrad after the show and he talked about some of the best dives around the island. Some good cliff dives, wreck dives, then he talked about a shark dive.  His passion about diving was what hooked me.  I knew this guy was going to be fun to dive with.   If he doesn't like the vibe of the person then, he won't take them out.

My girlfriend and I both agreed right away.  If we only have the time to do one dive, might as well do a dive where we get to see some big fish.  So the next day we were picked up by Konrad and taken out on an amazing experience.

Konrad is a Swiss guy,  who owns his own dive company and rents rooms at his house so you can dive right from his place.  He is very experienced.  Look up www.Condorito.ch   Condorito means quality not quantity.

The shark dive takes you a few smiles off the island.  Where the reef drops off to the deep channel between Roatan and the main land.  You only go to 73 feet, any further and you would drop off the edge to over 1,000 feet.

I'm not a big fan of feeding animals so they become accustomed to humans, but allowing people to dive with these sharks, helps protect them.  It's the same for trophy hunting in Africa.  If there is a value for an animal, there is a better chance that locals will put the effort into keeping it around.   If it wasn't for the dive companies convincing the Honduran government about how important it was to protect these sharks,  then they might have been over fished by now.   Around the world there is a major problem of over fishing shark species.

As soon as you dive into the water you, look down and see sharks circling below you.   I've never looked down into the water when I had actually been free swimming and have seen sharks below me. Well, bigger sharks like these were.    I have spend lots of time in South Africa photographing and cage diving with great whites, but being in a cage isn't the same. Visit this Link to See Photos of Great White's Breaching  But still an amazing experience.

As soon as you descend you feel like you are diving in an aquarium. The reef around you is in amazing condition, you have cliffs, the water is crystal clear, everything is normal except the school of 14  sharks swimming around you.  It doesn't feel reel.

Caribbean Reef sharks, are pretty beefy looking sharks, they are nothing like the cute nurse sharks we snorkeled with at Caye Caulker Belize.   They have those intense eyes that you see in cats, that go along with being a predator.

For the first 10 minutes you stay on the bottom and watch them circle around you,  making sure to keep your arms close to your body.  Humans have fed the sharks from their hands, so they might mistaken your out reached hand as a sign of food.

You take time to allow them to get used to you, and most importantly allow yourself to get used to being with them.  They wouldn't be here if it wasn't for a bucket for of fish that the dive master had with him.  They aren't looking for humans to eat,  they are looking for the free hand outs.   With out the food, the sharks would have been scared off.

If the current isn't strong and the sharks aren't acting aggressive, then you get to kick from the bottom and free swim with the sharks.    It's an amazing experience, swimming inside a school of 14 sharks.   It goes against every  natural instinct of survival.  it's like swimming around in the middle of a group of crocodiles.

After another 10 minutes, one of the dive masters, places a bucket full of fish on the bottom.  This is what the sharks have been waiting for.  Their slow pace soon turns aggressive, as they take turns pulling fish out of the bucket.  It's a feeding frenzy. The more fish that gets ripped open the more the sharks go crazy.  But once the fish is all gone,  the sharks disappear.   They don't want anything to do with you.

When the feeding frenzy is over, if you look around on the bottom you can spot shark teeth.   They fall out pretty easy when sharks bite down on something. Sharks are an amazing species.  They have a conveyor belt of teeth. When one falls out there is another ready to go in its place.

Back on the boat you get to share the amazing experience.  One you will never forget.  I totally, recommend everyone to do it, so they hopefully learn to respect sharks, and realize sharks aren't man eaters, we aren't what they are looking for. Even if you cut your leg on the reef, which one guy did, you don't have to worry about them going after you, they can tell the difference between human blood and fish blood. Fish are what they are after.

Posted by Beyond Adventure at 5:00 AM