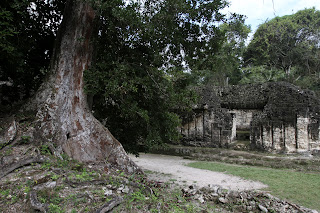 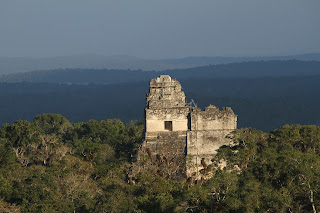 The Mayan ruin of Tikal in Guatemala,  is one of those places that captures your imagination.  Like a lost world, it is hidden in the jungle. Once a powerful empire, now only stands temples blanketed in rain forest.    Between 600 BC and 900 AD, the empire controlled the northern part of what is now Guatemala  As many as 150,000 Mayans, lived in Tikal.  Today, only twenty percent of it, has been uncovered, the rest is still covered by forest.

What attracted me to Tikal,  was not only having the chance of standing before towering temples, but in between temples you get to walk below the forest canopy, and hear and see life in the jungle.   It's a bird watchers paradise.  Parrots fly over head, tucans land on trees at eye level, and even jaguars,  have  been seen running through the ruins.

We made the decision to stay in the park,  instead of in a town of Flores, two hours away.   We wanted to wake up in the jungle,   instead of catching a bus from Flores  at 4 am to catch the sunrise in the ruins.   Like the majority of people do.  There are a few lodges to pick from at the part entrance.   Jaguar Inn, Tikal

Anyone who has heard howlers, in the morning knows, the show they put on.     They sound like a dragon is attacking a pig.     I've heard them before in South America, and have been looking forward to hearing their morning calls ever since.   They put on a show, that rivals, hearing lions roar in Africa and  wolves howl in Alaska.

Just before sunrise,  my girlfriend woke me up,  with a worried sound to her voice.    "Listen!  Somesthings outside"   I shot up and told her to come with me with a smile on my face  and we walked into the darkness and  stood below a tree where a male howler was sending out his call.

I told her they were howler monkeys,  she laughed and said at first she thought I was making some horrible snoring sound, like I was dying,   then thought there were people doing some kind of chant outside. It made spending the night in the jungle worth it.  We stood below the howlers till the sun rose and they went silent.

It was a perfect  ending to our time in Tikal.  the day before we walked through the ruins, under clouds,  then the sky pulled back to put on a show.  Just before sunset,  we climbed  ontop of the highest ruin, temple 4, and watched with clear skies, the red sun slowly dipped below the horizon.  The sounds of the jungle made for a great soundtrack.  We  had the top practically to ourself.

I almost thought about paying off the armed guard,  and sleep ontop of the ruin.  It would have made for an amazing and unique spot to spend the night.

Temple 4 is so high you look down over the forest like you are ontop of a mountain.  The rainforest, stretches for  as far as the eyes can see.    Spider monkeys pass in the canopy  between.  It's one of those spots you stay for a minute after the sun goes down.  Because you want to make sure to soak it in completely. 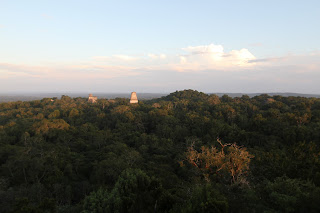 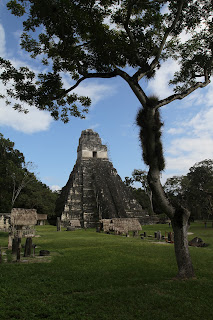 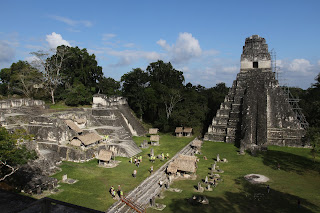 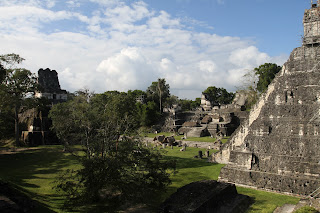 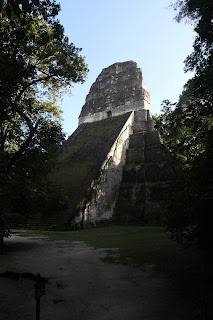 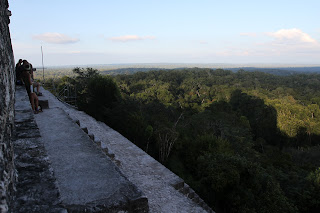 Posted by Beyond Adventure at 6:46 PM