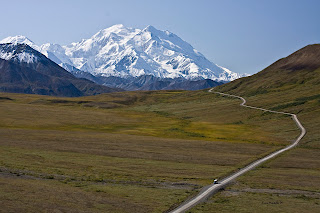 The Park bus slowly starts to make the climb up Stony Hill, all eye's scanning the hillside for signs of wildlife, binoculars in hand, cameras ready, suspense thick enough to cut with a knife. It's a crystal clear day, not a cloud in the ocean blue sky. The driver, a veteran of the park, has a smile on his face. The kind of smile someone has when he's concealing a secret only he knows.

The reason he comes back every year to drive this bus in the park, is part because he loves the outdoors and the wildlife, but also because of this exact moment that lies ahead, where he gets to share the experience of seeing the joy from those who come to the park. He glances up into the rear view mirror to witness the reactions on the visitors faces, just as the bus nears the crest of the hill.

Reaching the top, the largest mountain in North America, reveals itself from behind the hill like a curtain to the beginning of a show. One by one, each visitor lets out a gasp of amazement, as they view the massive 20,320 foot giant for the first time. Mt.Mckinley towers over the rest of the surrounding mountains, like some frozen granite cathedral, an Alaskan Taj Mahal.


Since I was young my parents have taken me up to Denali National Park to view Mt.Mckinley and it's animals. And in a few days I will be heading back there to take a friend who is visiting me, up to experience the park. To me it's more than just an amazing place to photograph and a great place to view Alaska's wildlife and beautiful scenery, it's spiritual.

My family and I back in the 80's, relaxing in the park, watching a grizzly bear mother and cub. I'm in the orange jacket looking through binoculars. 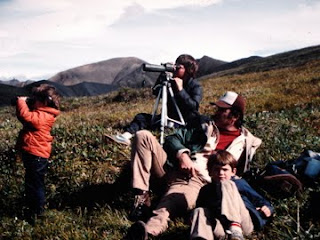 In 1907 Charles Sheldon a naturalist and hunter visited the area and was concerned about the future of the dall sheep and other large mammals from over hunting. After years of petitioning the US government to set aside this land, Mt.Mckinley National Park was formed in 1917. It wasn't till 1980 that the park boundaries were enlarged and it was renamed Denali National Park. Park officials over the years have maintained the hands off approach, to managing the wildlife, which has allowed natural up and down population cycles, that animals go through without human involvement.

The beauty of the park is not just the abundance of animals, it's the wide glacier eroded valleys, meandering river beds, and rolling hills covered in tundra. The park is the best place in north america and possibly the world to photograph wolves, massive bull moose with 70 plus inch antlers, and grizzly bears.

As I look forward to heading back up there, to photograph the parks animals and hike into the back country, a recent ruling eats at me. The elimination of a buffer zone that has helped to protect wolves that travel outside the invisible boundary of the park. Sadly, it's this abundance of trophy animals within the park, that has attracted man to suck from it like leaches. Trappers lay snares and traps along the park boundaries hoping to catch lynx, wolves, and any other animals that cross over the invisible line.

I eagerly wait to see if a pack of wolves that I spent a week photographing last fall, has survived the winter. Winter time is when trappers take the biggest toll on Denali's wildlife. The snow pack makes travel along the park boundary more easy. I have been told reports that trappers have taken many wolves this winter and one entire family. I fear my favorite wolf to photograph hasn't made it. A wolf that every morning when I hiked into the back country to photograph the pack, would walk right up to me and follow me like like a domesticated dog. One which laid down next to me one afternoon and we both took a nap during a snowy day last fall.

While I hunt myself and respect hunters and the revenue it brings to the state. I fully believe some places should be left alone. Set aside completely like a time capsule to preserve natures beauty from man's influence. Denali National Park is a treasure that you only fully appreciate after traveling the world like I have. I hope Alaskans will take pride in having Denali National Park in their state and fight to protect it in the future.


If you're interested in seeing photos of this wolf or other photos of Denali animals, visit my Alaskan Animals album by clicking on the Brian Montalbo photography website banner at the top or by copying and pasting this link