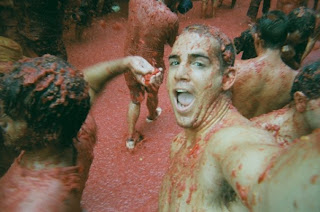 In elementary school during lunch period, a few friends and I would regularly chuck food at each other when the lunch duty turned her back. Our adolescent way of rebelling against regulation and control. Most of time nothing came of it but us getting caught or ratted out and having to clean the lunch room.
One day the most beautiful thing happened. We didn't stop throwing food when the lunch duty caught us, but rather increased it. We completely disregarded any rules and authority, ignored the consequences and punishment, and made our statement. But instead of it being an isolated event, one kid after another joined in on our food fight, until like popcorn almost every kid in that lunch room was throwing food at each other, laughing and having a grand old time. We were joined together in solidarity in one large rebellious statement. The lunch time duty was so overwhelmed to do anything about it, had to retreat for re enforcements.

I learned something valuable about human nature that day.

This video is an example of how one person breaking from the norm can influence others to follow.

When I found out about a festival where you were encouraged to throw food, I was attracted to La Tomantina like a dung beetle to a huge pile of elephant poop.

Located in Bunol Spain, near Valencia, this festival is home to the largest food fight in the world. Twenty five thousand people from around the world, throwing ninety thousand pounds of tomatoes at each other for just over an hour. Sound like fun?

Those of you who are stressed out from work, was always told not to play with your food and sick of it, or just want to have fun, make your way to La Tomantina. It's held on the last Wednesday of August every year.

Here's how it goes. Everyone gathers into one narrow street which has a wooden pole with a big chunk of ham at the top. The event doesn't start until someone gets the ham off the top. After many failed attempts, finally someone reaches the top and a rocket is shot off to symbolize the trucks full of tomatoes are on their way. Until the tomatoes arrive a huge t-shirt fight begins. It hurts! The street is very narrow so when the trucks come through, get ready to be packed in and make sure not to get run over. Five dump trucks make their way down the street, stopping only to dump their load of thousands of pounds of tomatoes. By the end of the fight, there is about 6 inches of tomatoes crushed under your feet. Enough to almost swim in it.

Tips. A lot of people where goggles because you get smacked in the eye a lot. I recommend it because I didn't wear them and I could barely see I had so many tomatoes in my face. 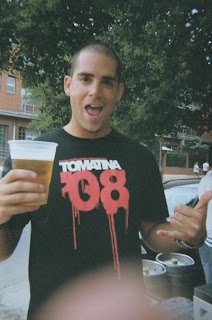 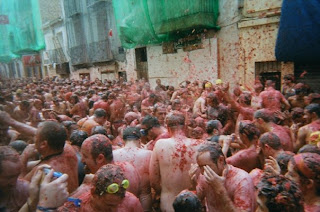 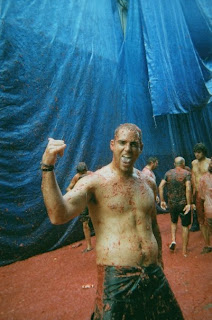 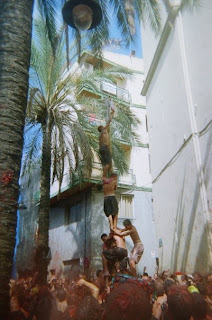 Posted by Beyond Adventure at 3:03 PM