Grand Canyon with my Dad 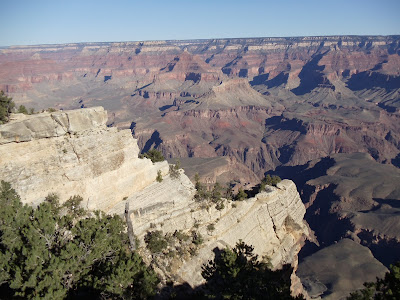 Since my dad can't walk fast anymore and I didn't want to just leave him in the hotel room, my mom rented us a wheelchair, so I could push him around.

We arrived at the Grand Canyon yesterday, which was an amazing sunny day but a little cold and windy. So I bundled him up, to keep warm. The view was amazing. The size and depth of the canyon blows you away. Both of us wanting to see as much as we could, and I wanting to take some photos, I got him into the wheelchair and were off. Luckily there is a path, that is paved, that goes right along the edge, so people can walk the rim of the canyon and soak in the amazing views.

Shots from a point and shoot I bought that takes panoramic pics. Click to enlarge. 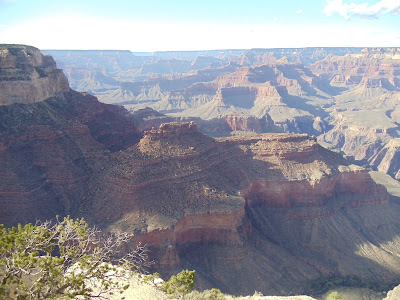 At first he hated that he was going to be pushed around in a wheelchair. Stubborness and pride from being a former NFL football player. But the further we went the more fun he had. "This is great,I just sit here and you do all the work"
When ever he saw a sight he wanted to see, I pulled over, put on his breaks and he sat there while I snapped these shots. 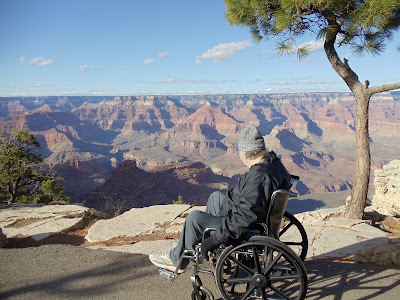 When I returned all I would have to say was ,"breaks" or "lets go" and he flipped off the hand breaks and we were off. On the hills he never missed a chance to laugh at me,"your sure sucking wind back there, want to stop and I'll push you for a while." Which I responded out of breath, that we were over 6,000 feet, so there was less oxygen in the air. Plus, the wheel chair wasn't the smoothest moving wheelchair on the market. He took non of my excuses, just laughed.

I got my pay backs on bumps, and the down hills when I would pretend to let him go, which he didn't like. " god damn it son, slow me down," His hands grabbing for the hand break.

All in all the first day was great just spending it with my dad. One I will never forget. We stayed along the rim all day. I pushed him 3 miles along the rim,and around the lodges along the edge. I got to get my shots and he got to travel more distance than he has in a long time, but most importantly I got to enjoy an adventure with my dad. Though a few steps slower than his athletic days,he still had the sense for adventure. We headed inside only to warm up and to get something to eat and drink. We even had a great window view during sunset. I drank my beer, while he had his hot chocolate. I joked with my dad if it was possible to get a DUI, being pushed in a wheel chair. The sunset and we headed back to our hotel room,both worn out, we fell asleep before 8pm. 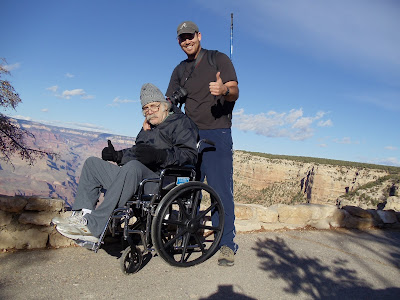 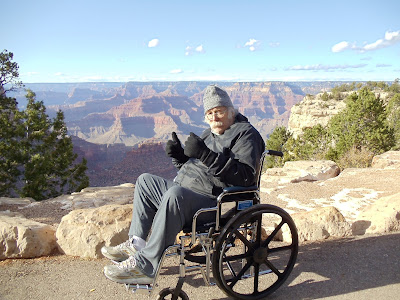 Posted by Beyond Adventure at 2:37 PM