Trying to find the Ice in Iceland 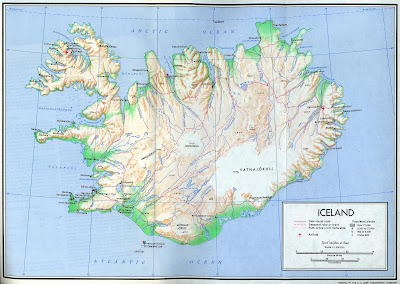 Iceland is about the size of the state of Kentucky. It is the world's 18th largest island. Lies just below the Arctic circle just east of Greenland, on the mid-Atlantic ridge, where two plates are spreading. Although it is called Iceland, warm currents keep the temperatures higher than would most areas this far north. So the island isn't completely covered in Ice like you would think. The rumor goes that the first Scandinavian who sailed to the island came across some frozen sea ice, so he named it Iceland. There are glaciers and ice fields on Iceland, which could have helped with the name sticking, but warmer winters keep snow fall from accumulating.

Greenland to the north which is covered in ice thousands of feet thick, is said to have been given it's name as a trick to get people to visit it. Iceland is highly volcanic, experiencing an eruption on average about every 5 years. They say an eruption could happen on the biggest volcano on the island any day now. Early in the year a volcano eruption on the island disrupted flights throughout Europe. 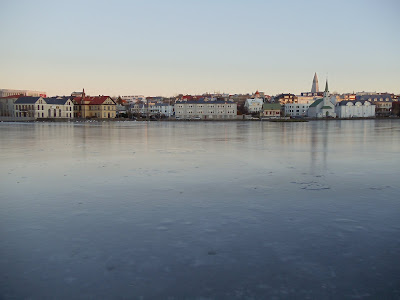 The capital of Iceland is Reykjavik. pronounced, Rey k javik. It's a very beautiful town with lots of cute shops. One of the smallest capitals in Europe, it has lots of European charm. 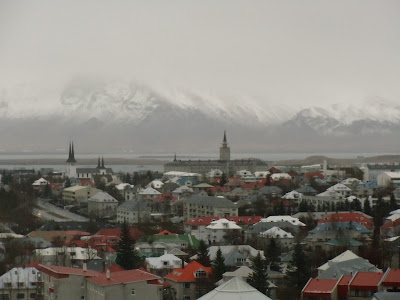 The first day was rainy and stormy, the original forecast was for it to stay like this all week. But the next day the skies cleared. 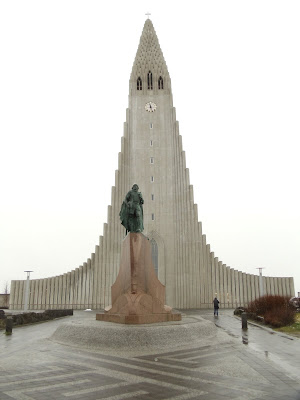 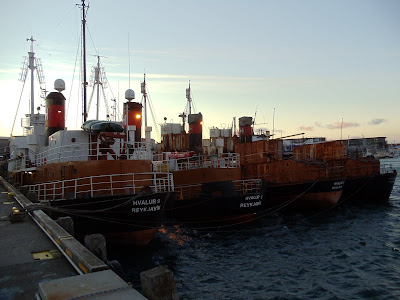 Old whaling ships, rusting in the harbour. Whaling has been a big tradition for Icelanders, but pressure from other nations have all but eliminated it. Some whales are still hunted but only a small percentage of what they used to take. So no need for the Sea Shepard.

To get a real feel for Iceland you have to drive through the country side. It's landscape is as rugged as they come. The highlands are mostly devoid of life. Only small brush and tundra grow. Rocky lava beds stretch for as far as the eye can see. Not the best place to want to hike. 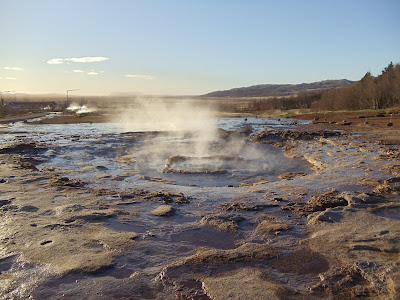 Because of the volcanic activity hot spots are all over the island. Strokur geyser is the most famous in Iceland and one of the world's tallest, just shorter than Old Faithful in Yellowstone. It erupts every 5-10 minutes in one big blow, so you get lots of chances to see it. The English word geyser originated from the Iceland Geyser. The great geyser in Haukadalur valley is the oldest in the world. 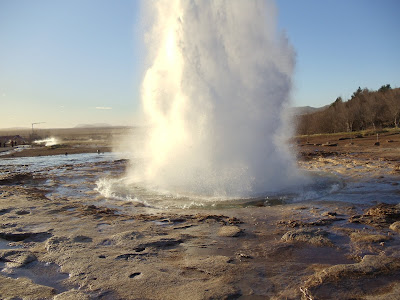 View from path leading to the Geysirs.

A lot of Iceland is flat, The country side torn and molded from the powers of fire and ice. 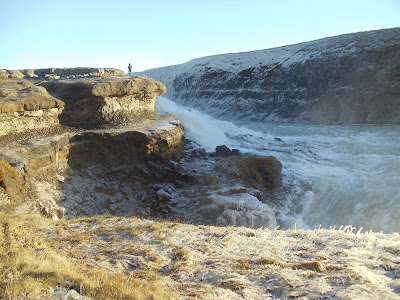 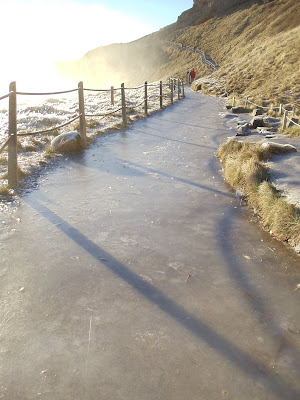 Wind made the spray from the water fall, freeze to the path leading to the falls, making it a fun ride down. 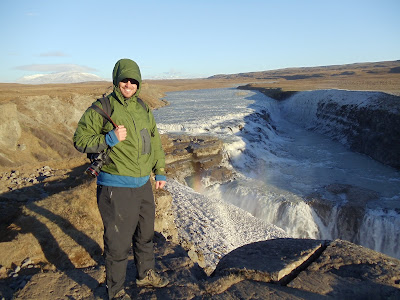 Although, there wasn't much snow, it was still cold. The air temperature was below freezing and a constant 30-40 mph wind made it nippy.

Driving along the southern part of Iceland. 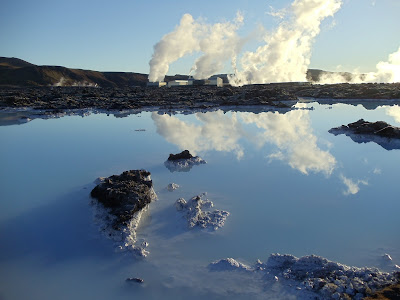 One of the most popular sites visited in Iceland is the Blue Lagoon. The bluish waters have attracted people from all over who want to bath in the mineral rich waters. The water is excellent for people who have psoriasis. The lagoon isn't a natural occuring lagoon rather the product of a geothermal engery plant that uses the heated water from the lava just below the surface to produce electricity, then dumps it out in a pool. A few locals began swimming in it and relized what a great thing they have stumbeled upon. The secret didn't last long. Now the lagoon is a full out spa with restuarant and swim up bar. On a cold day you definetely have to go for a soak. Just rub the mineral rich glay,which they provide to you, all over your face and sit back and relax.

This area of the lagoon isn't open for swimming. The cooler temperatures allows you to see the beautiful blue color. The side you swim on was very steamy, since the air temperature was below freezing. If you want great photos visit in the summer when the air is warm. 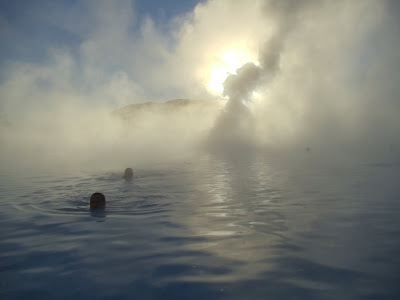 While the air was below freezing the water was a relaxing 98-102 degrees. 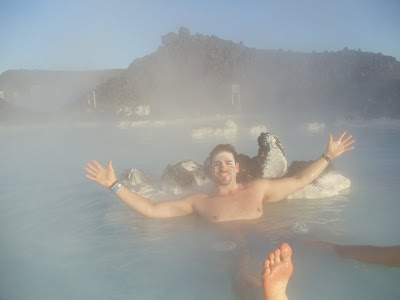 Enjoying the warm waters on a cold day. 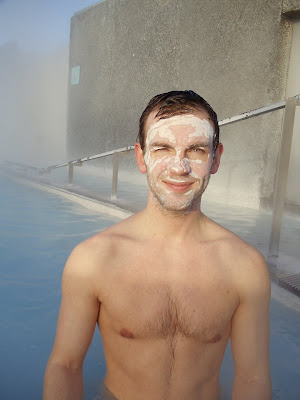 They have puckets of white clay, that you can cover your face with, good for the skin. 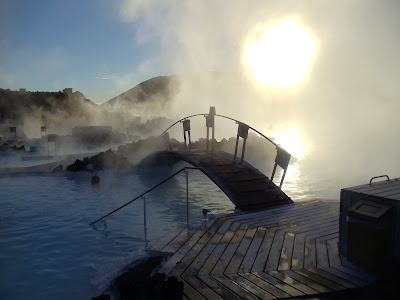 The lagoon has one big pool with smaller pools connecting to it. Steam baths, showers, and saunas surround the area. 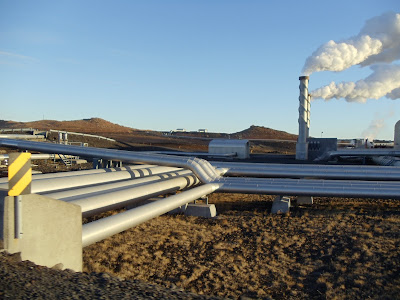 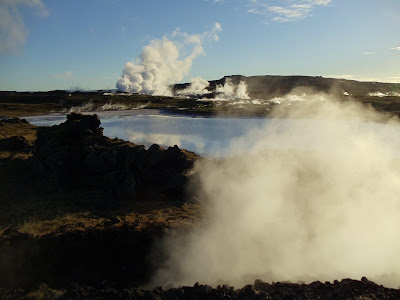 Steam rises from a hot spot on the island.


I didn't get to see a lot of Iceland. Wish I had more time. I definitely want to come back see more of the north and eastern parts. I did get to try puffin for the first time in my life. It was actually really good, at least with the sauce I had on it. Oh and to answer the questions I keep getting from my guy friends. The girls in Iceland are hot, and like outsiders.
Posted by Beyond Adventure at 12:56 PM