It's taken a while to send off another blog, because I have been traveling through the mountains of Morocco. Finally found some wireless Internet, at a nice hotel in Rabat.

My trans Africa trip started off with some excitement. While on approach to the airport in Gibraltar, a freak wind gust and rain storm almost sent our plane twisting into the ocean. Great flying by the captain and a last second thrust of the engines sent us climbing back into the sky. It shook up the passengers pretty good, I had a great view of the ocean since I was sitting on the wing and could have sworn our wing was pretty close to touching water. I was told the airport is the 5th dangerous airport in the world, because the huge rock face, which the town of Gibraltar surrounds, creates challenging wind gusts that bounce off the cliff face. Plus both ends of the runway drop off into the water. On the second approach we landed safely and the passengers all started clapping. I was excited because if we couldn't have landed on that approach we would have to fly to another airport and I would miss out on Gibraltar.


Gibraltar is a small point of land at the bottom of Spain, measuring only only 6.8 square miles.  It is controlled by the UK, because of it's location along the entrance of the Mediterranean Sea.  To enter the colony, you have to actually cross the airport and active runway, making it the only airport in the world where pedestrians can walk on an active major runway.   A four lane highway cross the airport making it unique.

Gates on both sides, let people know about incoming planes, like an incoming train. Sometimes police have to force people off the runway who aren't paying attention and are to busy taking pics of the incoming plane. I heard of one story in which a man thought the run way was a parking lot and drove down the runway parking at one of the terminal gates.

At the base of the rock of Gibraltar is the town.  30,000 people pack into a small area.   There are lots of great stores and restaurants, but the most amazing feature of Gibraltar is the huge rock.   The locals just call it "the rock" or "Gib" for short.  It once was called Mons Calpe, one of the Pillars of Hercules.

It's a short hike to the top, that gives you stunning views of the surrounding area.  You can see the African Continent in the distance on clear days.   Those who are less adventurous can take a tram to the top.   Where they can explore caves,  photograph the only wild monkeys in Europe, or visit the gift store. 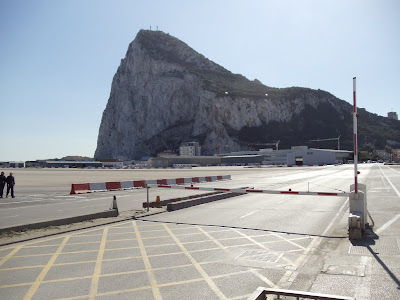 Gate for the cars and pedestrians, so they don't cross when a plan lands or is taking off. 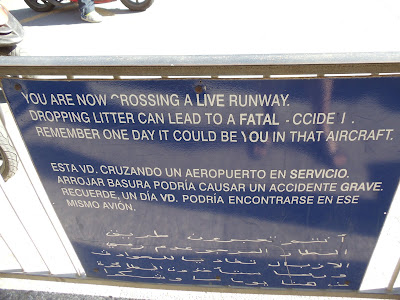 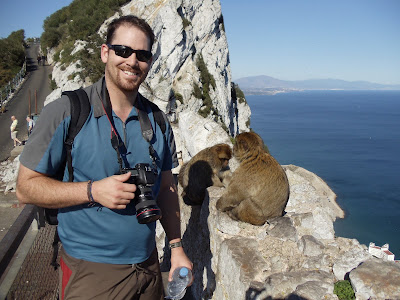 Monkeys have taken over the look outs. Brought over as pets from Morocco,  they now live on the mountain side. 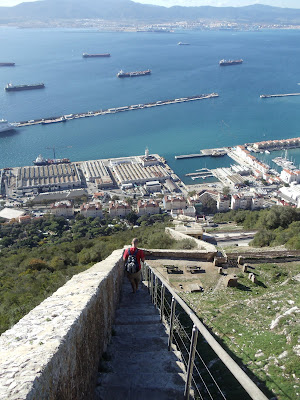 You can take a tram to the top, a taxis, or you can walk. Walking was more fun, but as you can see isn't the easiest way to the top. 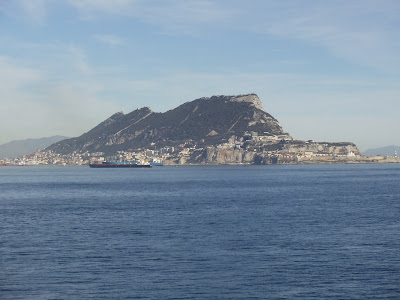 Gibraltar from the ocean as I was heading to Africa

Panoramic of Strait of Gibraltar. African continent on the left, Europe on the right.
Posted by Beyond Adventure at 2:03 AM