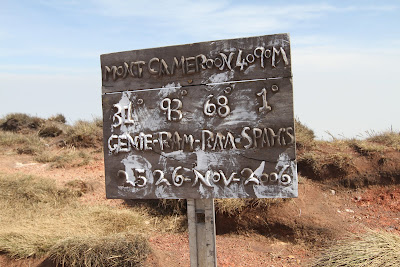 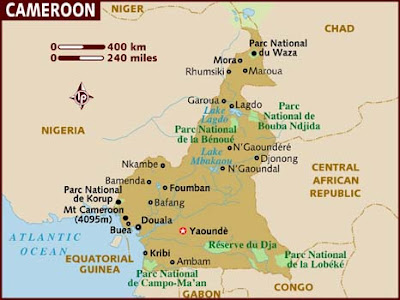 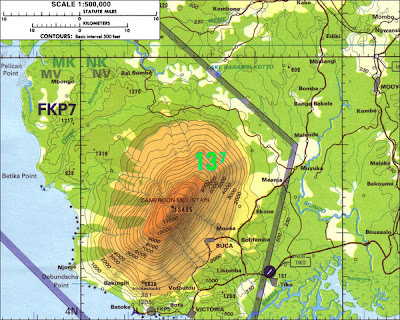 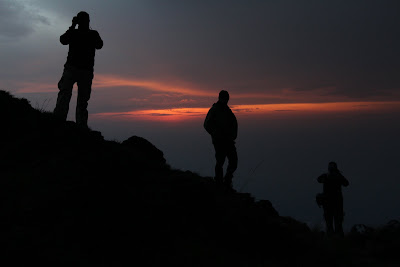 
Meeting up with my group in Ikom, near the border of Nigeria and Cameroon, our trip continued into the lush rain forests of Cameroon. The roads from Ekok, to Kumba are considered some of worst roads in the world, but adds to the adventure of over landing. Patience is needed to drive along this stretch, which depending on the condition of the roads can take a full week, as large trucks dig up the road till ruts deeper than the vehicle driving through them, are created.

The scenery is beautiful and traveling through the lush rain forest is a great change from the mostly dry Savannah that we have traveled through most of the trip.

I've been in Cameroon for a week now and I already like the place. The population of all of Cameroon is about the same as the largest city in Nigeria, Lagos. So you leave the over crowded conditions behind. The more I experience here, the more I am determined to want to come back to explore other parts of it. There are beautiful beaches along the coast, some rumors of amazing natural parks, and friendly passive people. Complete opposite of their crazy neighbors that we just drove through.

Near the town of Limbe, Cameroon lies the biggest mountain in western Africa, Mt. Cameroon at 4,040 meters(13,255 ft).  The locals call it "mountain of thunder," since it's still an active volcano. The last eruptions occurring in 1999 and 2000.

While considerably shorter than Mt. Kilimanjaro,(5,895m 19,341 ft) the highest peak in Africa and largest free standing volcano in the world, Mt. Cameroon is in my option more interesting to hike.   I spent three days trekking the volcano, and loved the terrain. There are lots of craters to explore, lava flows to cross, the bottom is a thick blanket of rain forest to hike through.   If get lucky you may even come across forest elephants which live around the base.

I recommend doing the three day hike, total of 52 Km. It will take you up the steep eastern slope, over the summit, then down the more photogenic western side, littered with recent craters, that you can walk to the edge of and look down into.  You can still smell sulfur while you look into the 2000 craters. 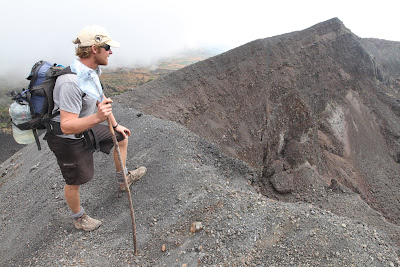 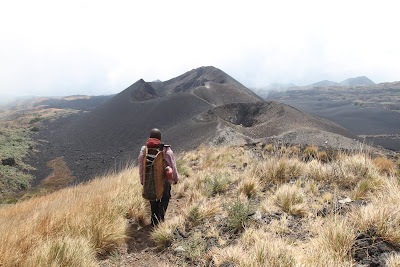 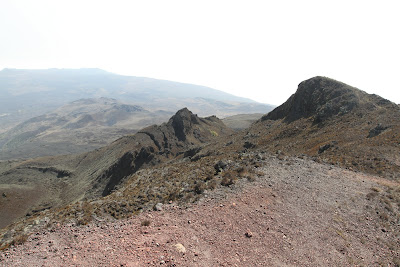 My guide told me that in the old days, when ever there was an eruption, the locals fearing that the mountain was angry with them, would hike up to the crater and sacrifice an albino.   Today the tradition continues but instead of using people, they use white geese.

If you are a serious runner, you can run the yearly race to the top and bottom.  It's called the Mt. Cameroon Race for Hope.

Currently in the town of Limbe on the coast of Cameroon, our trip is on hold for a few days till we see what happens with some anti-government protesting that is scheduled for the next few days around Cameroon.  Traveling through Africa you expect unrest.

Like I predicted in a past blog, after seeing protesters in the streets of Tunisia and Egypt, I said that other countries would soon follow. Libya is on the verge of conflict, as internet access, has been cut off in the entire country and a no fly zone is soon to go into effect, Morocco has crowds gathering in Rabat,and Cameroon is rumbling. Who's next?

But in the mean time we are camped in a beautiful location of Limbe, called Botanical Gardens. At the moment, it's clear enough here to seeMalabo, Equatorial Guinea.  It's a large volcanic Island off the coast, that is usually hidden behind clouds.


View photos of Cameroon
Posted by Beyond Adventure at 1:48 AM