After spending a week in Abuja, I was itching, like my mosquito bitten legs, to get back on the road. Boredom was starting to set in, since there isn't much to do in the capital of Nigeria, except burn through your money on expensive beers and watching movies, in empty theaters, in the only mall in the city. I was looking forward to the next section of our trip.

Killing time just before we left, I found myself in the hotel lobby, watching the conflict going on it Cairo, and footage of Egyptians riding down the streets on camels and horses trying to hit people, and then being ripped down and beaten, police cars running over and killing pedestrians, and people throwing rocks at each other. Up till Abuja our trans Africa trip had been pretty normal compared to what was going on in other countries around us. But that was all about to change. Traveling through Nigeria is like traveling across a mine field. It's just a matter of time till you drive somewhere that explodes in your face.Our mine was the town of Lafia.

The further in the city we drove, I noticed dark black smoke starting to rise into the sky, ahead. At first I thought it was a car accident, since it was so thick and black, like burning oil. I kept thinking about all the wrecked cars and trucks, I photographed driving the roads, so I figured we were finally coming up on another wrecked and burning. But the closer we got, I could see that the smoke was rising from different locations in the road ahead, and being lit by a crowd running around, and I knew at that moment this wasn't a car accident, that our trip finally would experience what has been going on around Africa.

I grabbed my camera, sensing something more dangerous was about to happen. The flow of traffic started to change, as the unrest grew. People started moving back towards us, instead of continuing up the street. Motorbikes started throwing U turns over the median, heading back the other way, I yelled back to the passengers that shit was about to happen.

Cars started honking to get traffic moving, since the traffic ahead refused to budge, like a dog on a leash refusing to be walked up the road, because it sensed danger. We had no choice but to sit in traffic and watch the conflict ahead unfold, up the next block. The situation, went from unstable to chaotic in a split second. And I had a front row seat.

Gun fire erupted in the middle of the crowd, people ducked and ran for their lives. The people in the street scattered like cockroaches, when you turned on the light. Our driver hearing this, knew things were about to get ugly and sensed the urgency to get his passengers out of danger, so he threw a U turn,in the middle of the street, cutting of traffic fleeing in the opposite lane, not caring if he rammed into any vehicles. I got a few pictures of gunmen running down the street with AK-47's in the air, others ducking and trying to escape gunfire, the road on fire, and smoke engulfing the city. Like rats on a sinking ship, everyone in town not involved in the uprising, was now running the same way down the road. Shop owners scrambled to close up their stores. Street vender's collected everything laying out, as fast as they could, and our heart rate began to rise.

We have seen some crazy things along our trip, but haven't come across any violence, but have been expecting it. So we drove away with a reality check of what can happen at any minute traveling trough any African country. I've gotten caught in the middle of a few riots in my life and the mob like mentality can snowball quickly, like a spark landing on a dry patch of grass. People feeding off the emotions of each other, boiling over till everyone loses their fear of the law and things just fall apart from their. When this happens in Africa, it sadly means that their will be a large loss of life.

As we sped off down the opposite way, not sure of where we could run too, since it was the only road we could take towards southern Nigeria. No one knew what was happening down the road, but no one wanted to wait and find out. We just expected it to be another religious battle that has been going on in the country since Christmas, and which has been really bloody. In the town of Jos, just north of Abuja, hundreds of people were killed in the streets, which ironically was the town we would have to pass through if we were forced to head back to Abuja, because of this unrest.

Since we had nowhere to really run to, our driver turned off into the police station. The police offers all drew their guns, as we pulled in, not knowing who we were, but making sure we weren't part of the conflict. But once they saw we were "whites", they relaxed. A group of police officers carrying AK-47's were already getting ready to take off, to help with the unrest.

Since our route was now cut off, we had no choice but to wait. The police told us they would return if things were OK to continue. So we hung out and chatted with the remaining officers, had lunch, and our driver warned other over landers that we met in Abuja, and departed after us, about what was going on here.
Later in the day, we were given the green light, so we continued back down the road where the gun fire was coming from. We passed burned debris, and a block that looked as if their was a lot of rioting, the police lined the street like riot police, wearing bullet proof vests, some holding guns, others only clubs. But we didn't see any dead bodies in the road. Not sure if anyone was injured or killed in the short outburst, we didn't stop to ask questions just drove through as fast as we could. Never heard what it was about, but political parties from both sides running for president were going to be traveling through the town in the next few days, so it could have been sparked because of that. 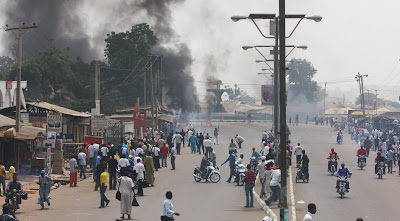 The conflict summed up Nigeria for me. A country full of some of the nicest people I have met, but stuck in a blender with a bunch of pitfalls,holding the country back, the both being grind ed up, till all the outside world sees of Nigeria is a milkshake of crazy people, that drives away tourism. Not the Nigeria that I have experienced, or the amazing rain forests that are in the southern apart. Nigeria has a lot of natural resources, a lot of oil, a lot of beautiful landscapes, and has the chance of becoming a world famous destination. Nigeria with all it's problems is still my favorite country in western Africa, and would recommend people to visit. It could be a richer, more beautiful, more peaceful, more of a place where tourists flock to every year to relax on the beaches, trek in the mountains, and view the remaining wildlife, but because it's not tamed I find it to be an amazing place to experience real Africa.
Posted by Beyond Adventure at 12:49 AM