Coast Of Ghana and It's History of Slavery. 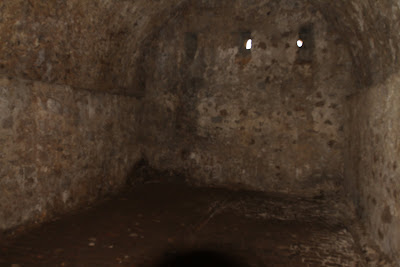 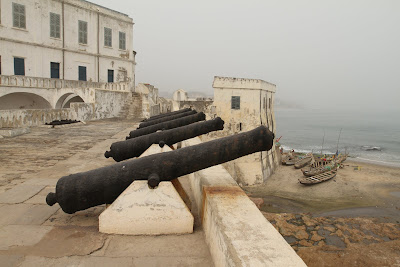 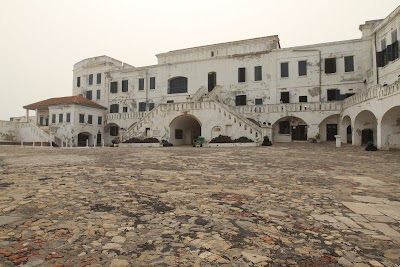 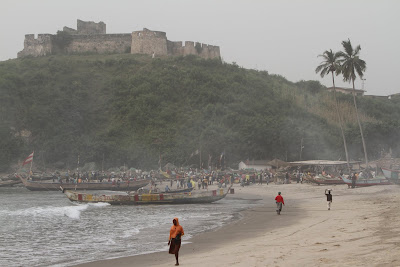 Ghana is like a snap shot of what all of western Africa might look like in the near future, as modern technology and western culture intermix, with traditional African lifestyle. I'm sitting in Accra, in the first mega mall I have seen in western Africa, and the last till we get to South Africa.The upscale section of Accra is nice, feels like back home with modern luxury, but the poor side of Accra is one of the crazier and most overcrowded places, I have ever seen.

The coast of Ghana has been relaxing, tropical rain forests meeting the ocean and lined with old slave forts and castles, now surrounded and included in local fishing villages. It adds to the experience to be body surfing the waves with local fisherman returning to their villages. English is spoken in Ghana so for the first time I've been able to communicate when walking in villages, which makes for a more rewarding experience than just waving and smiling.

Ghana was the first western African country to gain it's independence, from colonial power, and unlike the others, didn't tear apart its newly found freedom, with conflict, corruption,and war. It's stability makes it's future look bright,with a mix of beautiful cultures and a higher quality of life.

The people are very public about their religious views, almost all public transportation,and a lot of businesses, express this my including it in their business name. Such as,"God IS The Almighty Plumbing Works, Made From The Blood of Jesus Hair saloon. God is Great Hotel and Butchery. Let God Guide Your Way Furniture Store, and Jesus Loves You Bar and Club

When someone dies, their life is celebrated rather than mourned. They advertise upcoming funerals on billboards and signs, with a picture of the person who just passed away. Walking through town, or driving along the road, you may come across a big group of people dancing and singing, loud music playing, people having a great time, wearing shirts with a person's face on it, and you think you are coming across a wedding or party, but then you see an open casket, with a body in it, and realize it's a funeral. While in Kumasi, a local told us his family was having a funeral for his grandmother who died, and told us we should stop by.

While the country is densely packed with people, making it tough to find privacy to bush camp, the people are very friendly and easy going. They want to know just as much about your life, as you do about theirs. It's not uncommon to have a whole village surrounding our truck, as we set up for dinner. A very happy older man, walked up to our truck while we were parked and in complete shock and surprise, said "white man, you really are white!" We all let out a laugh. While our truck was getting a wash, three locals kept arguing with each other, finally they walked up to our driver, and asked him. " Where you come from, are their robots that look like white people?" He then asked why you ask, and they responded, " we just watched a movie where a white man was very big and strong, looked like he worked very hard in his life, but then his arm got ripped open and he was a robot underneath." You can guess what movie that might have been from. 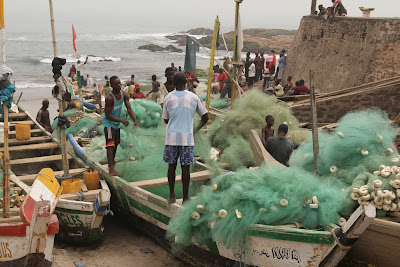 Traveling along the coast you get the best understanding of Ghana. Castles and forts from a darker period, are an interesting place to visit and take a tour of. You learn about the history of European control, the reason western Africa was so sought have from world powers, and their involvement in slavery. If you want to really get an understanding on slavery, come to Ghana and visit the Cape Coast Castle and stand in the dungeons where they held the slaves, walk through the "door of no return," that every slave from this area passed on it's way to the Americas, and hear the stories from local guides who talk with such emotion about that period. When standing in the dungeons they have a mark on the wall, to show how deep the human feces,vomit, and blood was. The dungeons were almost completely dark,except one small bit of light that let in fresh air. At the end of the tour, our tour guide asked us about our nationalities, we replied American,British, and Dutch. As you would expect the the black locals, who were taking the tour all turned around with an interesting look on their face. One white over lander told us that after they took the tour,a black local turned around and yelled at her,"how can you not feel, ashamed of yourself." She was wearing an "Obama's Girl" t-shirt. Emotions can run a little high.

Our guide showed us two plaques that were close to his heart. The first one was from President Obama, inside the Cape Coast Castle, that he unveiled, when he visited in 2009. It is very inspirational to the people of Africa, who had millions of people shipped off to slavery, but then finally have a black man of African decent, return, as the President of the United States.

Another plaque sits next to President Obama's, that was dedicated from the chiefs of the western African Coast tribes, who are ashamed of their past, for participating in the slave trade, by giving European powers, the land to build their castles and forts,who traded with them, and contributed in slavery by actually going out and doing the work of capturing Africans, to be sold into slavery.

"IN EVERLASTING MEMORY
OF THE ANGUISH OF OUR ANCESTORS
MAY THOSE WHO DIED REST IN PEACE,
MAY THOSE WHO RETURN FIND THEIR ROOTS,
MAY HUMANITY NEVER AGAIN
PERPETRATE SUCH INJUSTICE AGAINST HUMANITY,
WE THE LIVING VOW TO UPHOLD THIS"

Overall, Ghana is a great country to visit if you are new to Africa. It won't completely overwhelm you with culture shock. But at times you still are blown away with the things you see. I've almost given up on taking photos with my point and shoot. The lens is cracked and full of dust, but still taking lots of interesting photos with my professional camera. The fishing villages and slave forts have been the most interesting to photograph in Ghana. 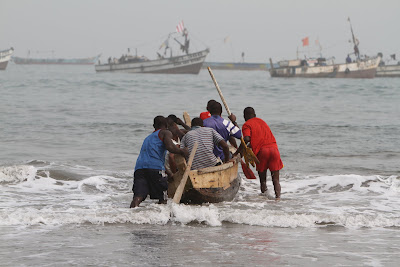 From here we will continue on to Togo and Benin, home of Africa's Voodoo culture and stilt villages. From there we will make our way into the crazy country of Nigeria, which at the moment is in the middle of a battle between the Muslims and Christians. I can't wait to share my photos from my professional camera when I get home. They will highlight more about Africa than my blog ever could.      View Photos of Ghana
Posted by Beyond Adventure at 3:56 AM