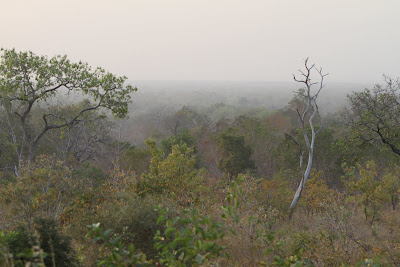 Link to photos of Ghana and Mole National Park 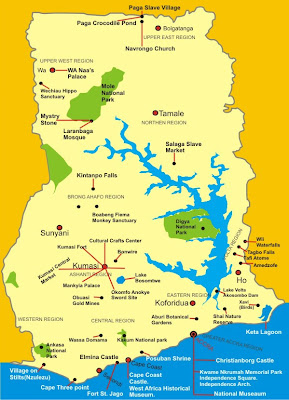 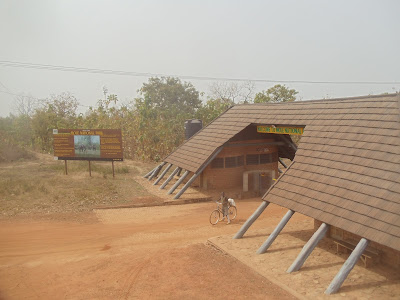 Entering Mole National Park for me was like a 10 year old on Christmas, about to open his presents. I was excited and giddy. Finally a park in West Africa, big enough and in a country stable enough to still have some of its wildlife.  More than some semi tame monkeys and crocodiles in a pond, where locals teased them with chickens, smacked them with sticks, and even sat on their backs, to prove human's dominance over them.


Mole is the best park in Ghana to see large animals such as the forest elephant, waterbuck, bongo buck, hartebeest, and a few other antelope species. The park is rumored to have hyenas, lions, and leopards, but poaching has forced them to be nothing more than just that, rumors. 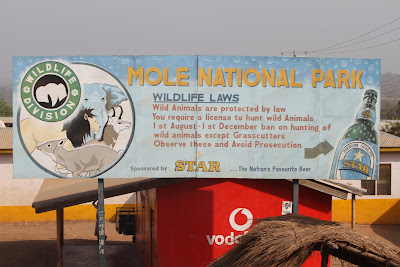 Mole National Park is 4,660 sq Km and located in Northern Ghana, near the town of Larabanga. Game drives and walks are offered twice daily(6:30am and 3:30pm) for about 5 and 12 US dollar. The only hotel in the park lies on the edge of a drop off, with an amazing view overlooking a watering hole, where you can sit poolside, or on the deck, and watch animals coming and going.  During the wet season it's the best place to view forest elephants.

But because it's west Africa, there are no safety regulations.    Photography and game viewing was terrible looking out from the jeep windows,  so they let us sit on the roof.  Far more dangerous but way more fun.  If you were worried about safety, you would be traveling in west Africa, anyways.

Best view I have ever had from a game vehicle.  But you had to hold on tight, bouncing over rocks, crossing rivers, and making sharp turns.    Only down side your ass got sore and you had to watch for low branches. 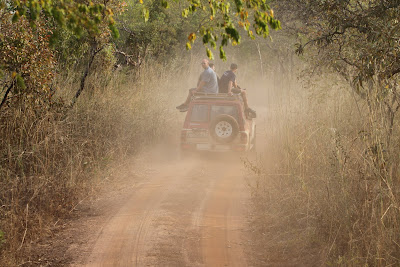 The rangers work very hard to get you up close to elephants, maybe too close, because these animals are still scared of humans.  It's an amazing experience when you do get up close.  We followed a large tusker male forest elephant through the forest.  Even though it was only 50 feet from us, we could just make it out.   Terrible for photography but still a memorable experience.

The most memorable experience didn't come with the game drive,  but rather at the camp ground.  Our group stayed at the camp ground next to the hotel, which also over looked the forest and water hole below. Warthogs walked around our group like dogs looking for food, vermit monkeys occasionally darted across.  The baboons were bullies and used their numbers to get what they wanted.

We were warned that the baboons, were very aggressive, were dangerous,  and didn't back down to humans.    It was my day to make lunch from the truck for the group.   So while making lunch I kept an eye out for the troop of baboons.

Sure enough, the smell of food brought in the first baboon, in only a few minutes.  Like chumming for great white sharks, in south Africa.   View link to see photographs of Great White Sharks.

After every one ate what we served, we quickly locked up the truck and closed all the windows, and covered the roof, so they couldn't get in.  Baboons are worse than black bears if they get inside open vehicles.


At first it was great to watch them.  Baboons are hyper animals and love to play.   But these assholes,  were more cunning.  They just hung out, sitting in trees, on rocks, keeping their distance, thinking, eyes constantly scanning for a chance to quickly run and grab some food.  Baboons are fast, strong, have canine teeth bigger than dogs, and are very smart.    I have met more than one African who told me stories about having their arm ripped open, getting bit, or even mugged by baboons. 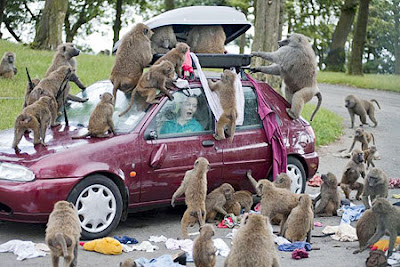 Found this Photo on the internet to show you, how a troop of baboons can be a pain in the ass.

Finishing lunch and cleaning up, as fast as we could, we kept the boons at a distance, since we out numbered them. But as people left  the campsite, to get drinks at the bar, more and more baboons began to show up, aggressively trying to chase us away, teeth showing. 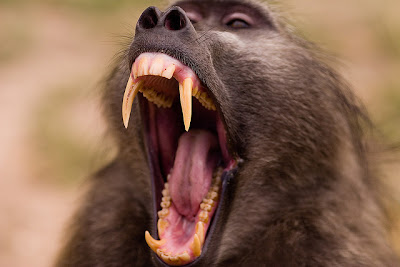 Another photo from internet.    Showing the weapons they have in their mouths.

Out numbered, I was forced away from the truck so I retreated to a safe distance and watched them fight over left over scraps.   Like ants they were everywhere on our truck. Then came the moment that, finally my baseball arm would come in handy off the baseball diamond.

One of the passengers on the truck who didn't have lunch, walked back to camp from the bar, and failed to realize that baboons had overtaken our camp. Before I could warn him he walked around the truck into the beehive, full of baboons, and in a cocky way waved his arms and yelled like a crazy person trying to get them to scatter like pigeons. Big mistake!

The whole troop surrounded him and was on him in a split second. The two largest males led the charge, forcing him to run for his life. At this point I really feared for his safety.

I ran from the spot I was sitting, grabbed two rocks and declared war on the boons. I fired a rock that I had in my hand, like a fastball. Luckily with sniper like accuracy, because I stopped the largest baboon in his tracks which was just feet behind Martin running for his life.  Another second and the baboon would have surely bitting his leg.

I ran at the troop, firing rocks has hard as I could at baboons, like a mad man. Rocks bounced off trees, rock walls, the smaller baboons ran for their life right away, as fastball after fastball forced them to retreat. No doubt never seeing the speed from a former professional baseball pitcher.

Not wanting to give up their territory the larger baboons, bravely fought back even harder.   It was a full out battle and I had no choice but to fight back.  We were surrounded by  angry baboons.

I started scattering the baboons, but not wanting to hurt them, since it was a national park, I aimed for a rocks, trees, or patches of dirt, near them to scare them. For about 10 minutes it was all out war, neither backing down.  My heart was racing, but I had no time to get scared.

Luckily, their were lots of baseball size rocks available in the parking lot,  because the baboons seemed to want blood. They just wouldn't give up. Firing a rock off a stone fireplace would send three running for safety, but then another one would running in from another location with teeth showing and I had just enough time to fire a rock at him.    It was like some scene from a monster movie.

But in the end my firepower was more than they could handle.   When the last baboon finally ran back into the forest, I sat their panting for breath.   The passenger who was hiding behind me, said "holly shit man thanks for saving my life," and went running off to the bar to tell everyone what had happened.

The baboons didn't show up anymore for the rest of the time we were there.   I guarantee they will think twice, next time they come across a baseball player. 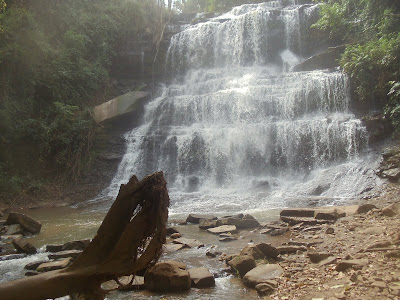 Water fall on the way to Kumasi, Ghana 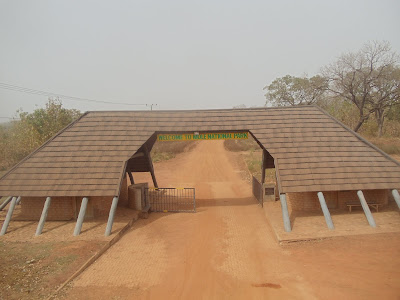 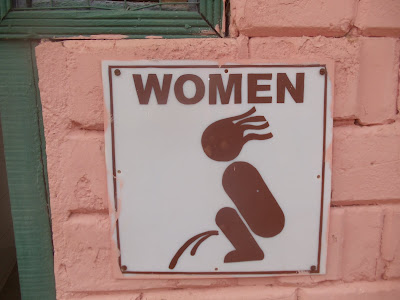 Laughed at this sign on the bathroom in Mole. Hair blowing back wards, yet peeing forwards. 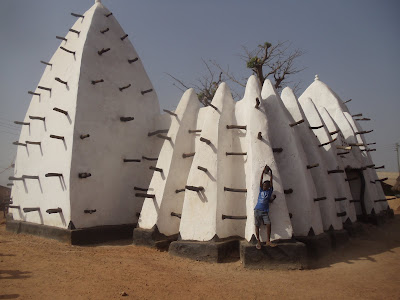 Beautiful mud mosque in the town of Larabanga
Posted by Beyond Adventure at 4:51 AM