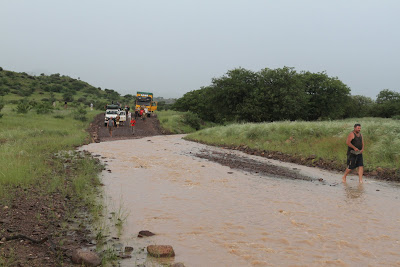 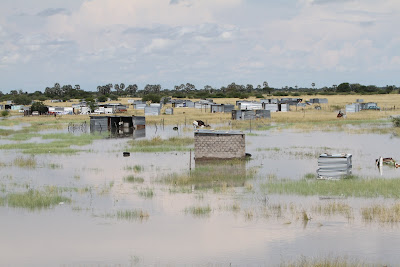 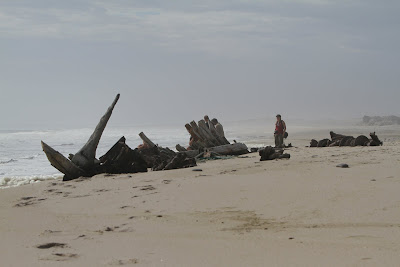 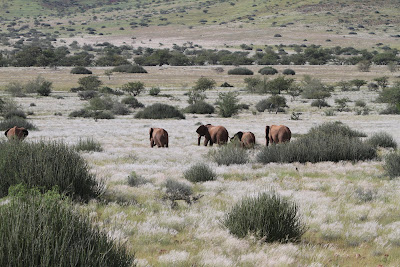 After spending the night at the border and hearing gunfire, we made our way west through the flooded northwestern section, of Namibia, which had been receiving the same heavy rains as Angola.  It was the most rain fall they have ever had in parts of Namibia

The country side looked more like a lake, in parts covering the main road. The locals were actively fishing the bridges along the road, stocking up on some small fish.

We passed along the western border of Etosha National Park, viewing a lot of giraffes, zebras, and springbok, both inside and outside the park border. It was nice to finally see some African Animals, after seeing only monkeys along the roads in western Africa.

It was fun watching those who have never seen a giraffe before in the wild, stand and stare in amazement. Watching a springbok leap 6 feet into the air as he darts away, from the truck, or a Zebra running at full speed, is much more interesting than just driving down a lifeless landscape.  It's sad that we have spend almost half a year in Africa and it took traveling through over 10 countries to find a place with large wild animals outside of protected fences.

As soon as I heard that we would be traveling through northwestern Namibia, and eventually making our way to the Skeleton coast, I was as exited as a fat kid blowing out a birthday cake, because it's a hard place to get to.  Trying to make your way there on your own without a dependable vehicle would be suicide.

Only a truck or overland vehicle with a big gas tank, can travel through it. The place is so big, isolated and rugged, that you would be in a world of hurt if you broke down.  It's called skeleton coast because that's all that was left of sailors, if they were shipped wrecked along the coast.

Heading south from Etosha National Park, we headed up and over some mountains.  Even though we were traveling through the rugged desert of Damaraland,  the rains began again. The rains started and never stopped during the day, in the desert this means flash flooding.

Writing this blog, I was told that the flooding is the worst central Namibia has ever experienced. There have been many drownings of school kids, not used water moving fast in the usually dry landscape.

Every river channel we crossed, had water traveling down it.  Many reaching flood levels.   At one river crossing, the water was over three feet deep and rising fast.  Even our huge truck couldn't make it across.  We were forced to camp for the night and wait to see if the water level would go down the next day.

As we waited along the river, a local drove up to the river and waded into the middle to see how deep it was.  Testing to see if he could cross.  Most safari vehicles in the area are made to cross deep waters, so he must have felt confident, even though the river was moving fast.  He kept walking till the river was at his waist, and still rising fast. You could see the water make it's way up the rocks, before your eyes.

Sensing he was about to find himself up shit's creek, I started walking my towards the river.  I've crossed enough rivers back packing in Alaska to understand which can be crossed easily and which can't.

Before I had time to ask if he was OK, he was swept off his feet and was taken down the river. I kicked off my sandals and ran into the river after him, chasing him like some brown bear chasing a salmon swimming down river.   I crabbed his out reached hand's, panic was in his face.  I had to use my height and all my strength, to haul him out of the current, before he was washed down river.

It was the second time, on the trip that we had to rescue a local from drowning. In the Congo, a passenger went surfing with a white South African, we had met hiking Mt. Cameroon.

The waves were huge, and that section of beach had a nasty rip tide. While surfing,  some locals came running up to them and pointed into the ocean where they could see some young kids that were swept out to sea, and in big trouble.

They ran into the ocean with their surfboard, and rescued two of the kids, a third was never found again. They paddled up and down the coast for hours before they gave up because they were exhausted.

Instead of thanking them for saving the other kids, the locals surrounded them some laughing about the situation, others got angry and chased them with logs. We found out later that a kid drowns there every week.


We woke up the next morning to sunshine and just a trickle of what the river was the day before, the water going down just as fast as it went up. So we packed up fast and continued on.

With the rains, the mountains, which usually are dry and lacked much vegetation, had transformed into a green oasis.  From the photos you would never guess we were in a desert.

Along the roads we saw large herds of Oryx, Kudu, and Springbok, obviously enjoying the gift of fresh green grass. Even a huge troop of black baboons crossed the road, with what looked like a sigh of relief on their faces.

I sat on the roof of the truck and scanning the lush landscape, with my camera.   Even though we weren't in protected lands,  there were animals everywhere.   Deep down I was hoping for a chance to spot the rare desert elephants or even more elusive  black rhino.  As the day went by, I realized it was going to be like finding a regular coke in the refrigerator of a pageant girl's house.

Then I started seeing piles of elephant dung on the roads.   It didn't take a tracker to know they were fresh.   Everyone's energy spiked in a second.   From my lookout on top of the truck,  a safari vehicle was spotted driving across the road, and before I had time to connect the two,  there they were. A herd of ten rare desert elephants just off the road, I couldn't believe our luck.

The desert elephants of Namibia are smaller than normal elephants, have bigger feet, and can go longer without water. They have adapted to the dry life of the desert.   It's an amazing biological adaptation, because elephants usually need lots of water to drink a day.

The safari vehicle following them was from a lodge, where people can spend a thousand dollars a night, hoping to be taken out to find them. There are a few located in northern Namibia.  Only two people where in the vehicle, and probably spent as much money in a week as our whole trip cost for 6 months.

Our driver pulled to the side of the road and I jumped up on the roof and started snapping pictures.  Skeleton Coast, desert elephants, and Namibian Coast. I was told only 30 desert elephants are estimated to exist, in that area.

The tour leader and driver climbed up onto the roof and excitedly said, "they do exist, I can't believe it."    They had spend over twenty years driving through Namibia.

After a long time watching them make their slow march across the landscape and out of view, we continued on completely jazzed. Hopefully I will see them again someday.
The luck summed up this trans African trip, you just never know what you will see.

The road to the Skeleton Coast got more and more rugged as if we were over landing a thousand years from now,  over the red landscape of Mars, except with no breathing apparatus.

That would be one hell of an adventure! To be the first person to summit the largest mountain in our solar system, Olympus Mons? Which is located on Mars, is 25 km high, and almost three times taller than Mt.Everest.

On planet Earth if you want a rugged adventure, go to the Skeleton Coast. It's named that for a reason. If you die here, you bones  will mix in with the thousands of seal, whale, and dolphin bones already scattered all over the beach. A few ship wrecks can still be seen, some still in tack, but the wooden boats, only a skeleton is left.

Like ghosts, lions used to be found along the coast but rarely seen.  They survived by scavanging on dead sea life.   Brown heyenas, and jackals,  are now the most common animal to see along the coast. 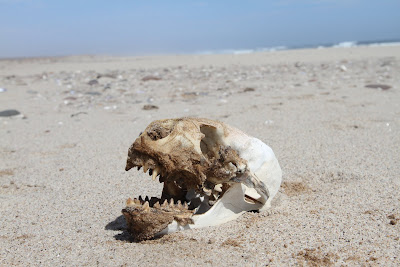 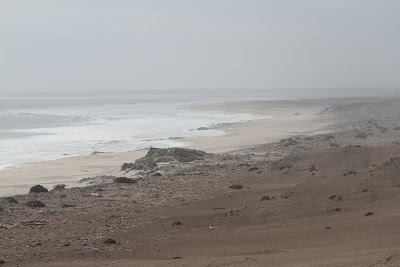 To travel through the Skeleton Coast, you need a permit, possibly because it's so rugged and also because diamonds are still mined in the area. You are not allowed to drive off the one, lonely path that takes your down the coast, or even walk off the road. Your permit is to just transit through the area.

Not knowing this, we stopped for a break and a group of us went to body surf in the rough seas, couldn't pass the chance at swimming along the most unforgiving coastline in the world. The fallen sailors would have rolled in their graves, seeing us play around on the coast with no worries, since we had a truck loaded with food and water. 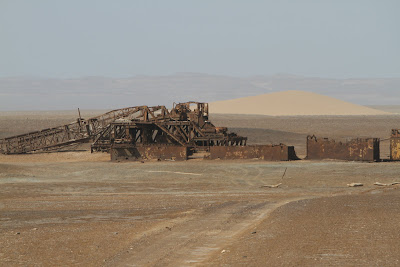 One of the passengers asked me while traveling down the coast, if anybody lived out here. I said, "yes, the Fuckarewe people do."

"Who are they she said?"

" Well, they have small heads and brains, large feet, and every morning when looking for food to eat and water to drink, they look at themselves and say, Why the Fuck Are We living out here?"

For more photos of Namibia click on this link.  Skeleton Coast, desert elephants, and Namibian Coast. 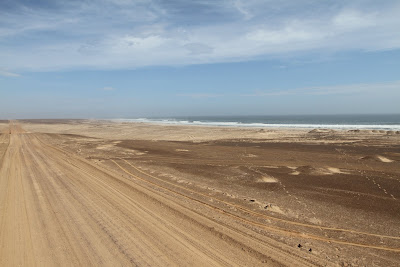 Posted by Beyond Adventure at 1:53 AM