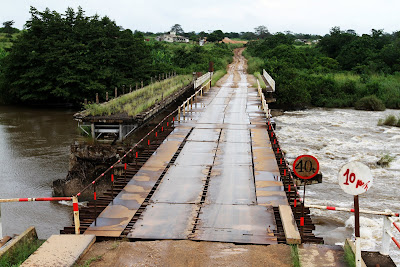 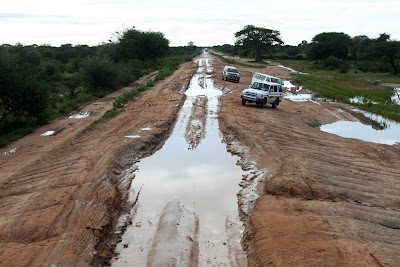 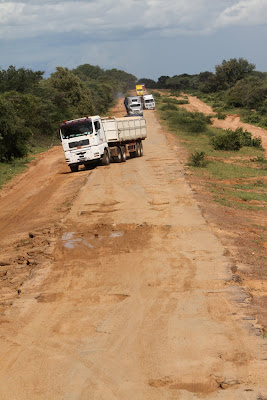 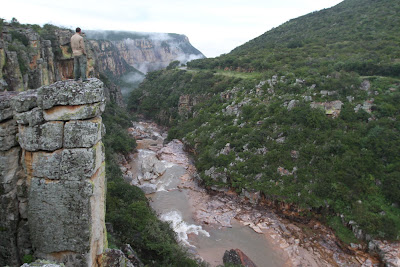 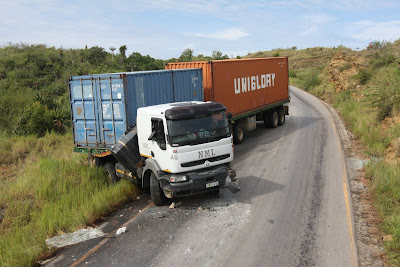 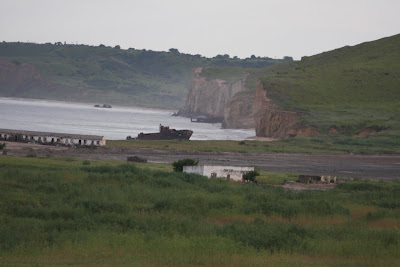 View Photos trip through Angola
For 27 years Angola ripped itself apart in Civil War, which recently ended in a cease fire in 2005. The borders opening up in 2008 for foreigners.

Today overlanders are experiencing an area, unknown to even Africans, for the past quarter century, since the bloody war was all people knew or cared about.

It is now open to explore and after spending 7 days traveling through the country I encourage people to visit, since I am hoping to return myself.
Everything is huge about Angola. The country(4 percent of the African Continent0, coastline(1,650 km), rivers(Congo and Kubango) trees (baobobs), waterfalls(Kalandula)3rd highest in Africa) and even it's diamonds. But sadly the amazing huge landscape is empty of wildlife. Where once roamed huge herds of elephants, giraffes, and antelope such as elands, roan, bushbuck, and steenbok, now is open grasslands scattered with leftover land mines. 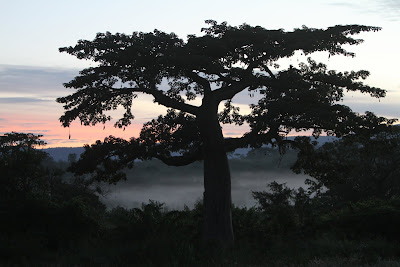 Almost all the wild animals were killed for fun and for food during the war. Not many survived the bloody conflict that, also killed and injured over one million people. Even the Cristo Rei, (Christ statue similar to the one in Rio and Lisbon) which stands above Lubango, has missing fingers, and damage to his face from bullets . 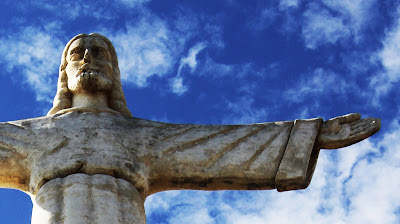 < Traveling through Angola you see evidence of the war everywhere, buildings with bullet holes and collapsed walls, ship wrecks scattered along the beaches, armored vehicles, tanks , and even helicopters lay rusting along the roads, where they where destroyed in the war. 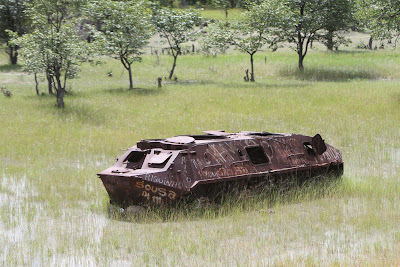 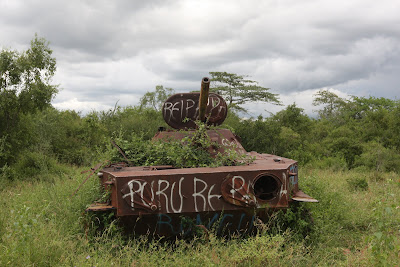 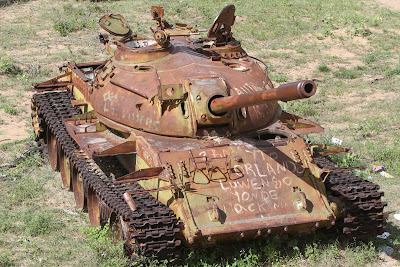 View Photos trip through Angola
The largest tank battle since World War Two, was fought in Angola, both sides financed by the two world powers at the time, Soviets and USA.
Just because the landscape is empty of lions and leopards, doesn't mean it's safe to explore. Landmines are still scattered about the country, in some places in large numbers.

A red mark on trees or rocks often is the only warning that active mines still exist that haven't been cleared. Landmines can stay functioning for up to 80 years after they are layed so it makes bush camping a little more exciting.
Work has been done to clear certain areas, mostly along major roads, others have been left to the wild donkey's that were imported, to clear the rest. African conservation at it's best.

The country and even the customs agents haven't gotten used to tourists entering the country. Crossing the border from the DRC, the only tourists they see are die hard over landers, that have survived the trip through the DRC.
Our Angola Visa numbers, which were issued to us outside the country, where still only in the lower double digits. But I predict Angola being the new overland playground in the future.

Traveling from the north to the south, you see not only a change in scenery, but with the people as well. There is still a lot of struggle going on with the people in Rural areas. Just now, feeling safe to come out of hiding and build back their lives, like sand crabs at night, on Waikiki beach, after having to hide all day, as mobs of tourists flood the beach. 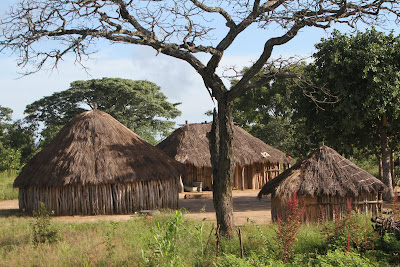 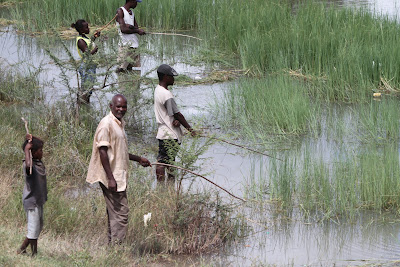 Outside one town, we stopped to have lunch. Our tour leader climbed into the back of our truck and had just enough time to say, " OK this looks like a good place to have lunch..... oh shit." As she looked back behind us, and hundreds of locals were running towards us down the road, like the beginning of the Boston Marathon, carrying anything they could sell.

Our truck was completely surrounded, with a flood of people, holding bananas, chickens, even kids, for sale. We stayed long enough to buy some stuff, but no kids, (leave that up to Madonna and Angelina),then headed off down the road to have lunch.

As long as the country avoids heading back into conflict, the future looks bright for Angola. It has a wealth of oil and diamonds, and lots of western money in the country, so it's wasting no time transforming the major cities into some of the more modern ones in Africa.

Walking the cities of Luango and Luanda, you could convince yourself you have been transported back to Europe by some vortex. You see lots of mixed people, mostly Portuguese, other European, and Asian blood mixed in with Africans.

Conservation in Angola is also on the upswing, since they can't go anywhere but up. Animals are being re-introduced to National Parks, where they were completely wiped out. Operation Noah's Arc, is transporting giraffes, elephants, lions, and other game from southern African countries.

The Giant black sable, with it's 5 foot arching antlers, which is only found in Angola and is a national symbol of pride for the country, was thought to have been put into extinction by the war. Conservation groups and the government, spent years searching by foot and by helicopter to see if any individuals remained.Years later, a hidden camera placed in one of the more remote sections of the country documented nine individuals. Only time will tell if they save the species.


This year, the rains in the mountains of Angola where the heaviest in over 20 years. Every day we were hammered with a down pour, which flooded the cities we passed. The water that falls in the mountains head into the Kubango and flows south into Botswana, forming the famous Okavongo Delta. The largest inland river delta in Africa. This made the roads muddy and torn up, slowing our progress through the country. 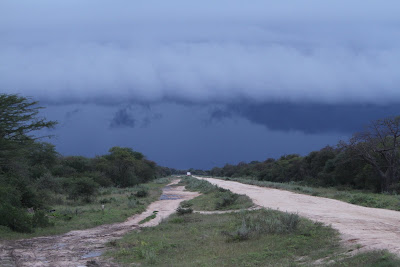 Drunk driving is such a problem in Africa, since Africans consume more beer per capita, than most other countries. It's scary to think that a lot of the truck drivers that pass you, are intoxicated or high on a plant (forgot it's name) that puts them into a zone, where they can drive for days.  We just drink coffee in the States.

We have had drivers, pull up and try to talk to us, but nothing comes out because they are so drunk, so they just bang on their head trying to spit something out.  The few loose wires left in their head don't re attach.   Others get out and start dancing around their truck, waving to us like a circus performers.  We just laugh.

Evidence of how great the drivers are in Angola, are the crashed and mangled vehicles lines along the road.  It reminded me of Nigeria.    I would hate to drive the roads for a living in Angola. So many wrecked cars litter the sides of the roads that we started counting them, some turns had 8-10 wrecks. We stopped counting at 210 after only a half a day. After 7 days traveling, through the country the number could easily be over a thousand. 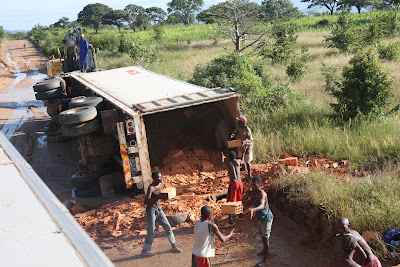 Even more numerous than wrecked cars is the number of Chinese you see in Angola. Africans call them the next, invasion to hit Africa since the white man. Though they don't want slaves, they employ their own people, they just want the natural resources. The booming Chinese economy needs somewhere to quench it's thirst. 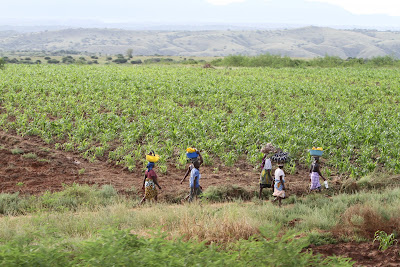 It was a shame we had to race through Angola, since we only had a 5 day visa to cross almost 2,000 kms on some of the shittiest roads along the trip.   As we expected, we were still two days late arriving at the Namibia border.

We tried to get an extension in Lubango, but the customs office said we were fine and didn't need one. ( Never trust officials in Africa)   But wouldn't give it to us in writing. So when we arrived at the border with Namibia, we weren't surprised to find out they wanted to fine us $150 dollars a day per person for every day we were over our limit. That meant that we were going to have to cough up, $7,500 as a group.

Finally, realizing that we weren't going to be bullied by their threats,  they did what they could to delay our progress leaving the country.   They kept us at the border until it was just about to close and let us through. Knowing that the customs agents in Namibia had already closed. So we were forced to camp for the night on the border of the Namibian side, and spend the night joking around with the police officers from Namibia who were much more friendly with tourists. View Photos trip through Angola
Posted by Beyond Adventure at 1:44 AM