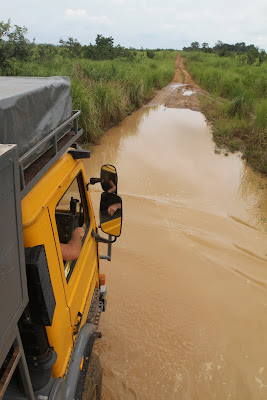 The Country of Gabon was one of the highlights I was looking for when I decided to do the trans- Africa trip. The country is covered in virgin rain forest, still has abundant wildlife, and has a bright future in Eco-tourism, since their President recently put 10 percent of the country aside as protected land.

Until recently you wouldn't dare travel through Gabon, it sits in a dangerous neighborhood, and has had a history of civil unrest, but today it is much safer to travel around.

Gabon's rain forest covers nearly 75 percent of the country, and with only 1.5 million people, the combination means lots of untouched landscapes to explore. It's an adventurers dream, lying on the equator, with rivers to raft, mountains to explore, beaches to walk down, and one of the better places left to see rain forests teaming with wildlife.

Lope National Park is amazingly beautiful, having the potential for a world class Eco-destination, where tourists flock to see the abundance of forest animals, but it hasn't yet arrived to the level to support them. Though to be fair it only became a National Park in 2002, so it has time to work it self out.

As a photographer I was excited to experience Lope National Park. It would be the only place I have ever been where I could go elephant, gorilla, chimp, and mandrill trekking at the same time.

Earlier in the trip, in Mole National park Ghana, I sat on the roof rack when taken on a game drive, so I wasn't surprised when I was picked up for a game drive in Lope, by a rusty beat up Toyota truck, with only a bench in the back to sit on, which slid back and forth as you rounded turns. I laughed, since Gabon is trying to market it's country to higher end clients, charging ridiculous prices for some packages to visit the national parks.

While heading up the first hill to the gate of the national park, on the game drive, the truck stalled and died, not having enough power to make it up to the top. I jumped out of the back of the truck, just before it began rolling backward down the hill, gaining speed, the driver desperately trying to keep it on the road, panic on his face. The truck hit a bump took a sharp right and starting heading off road down into a ditch, almost flipping, and coming to a rest, just inches from one of the parks cabins. The passengers held on for dear life.

I sat at the top of the hill watching it unfold, nervously laughing my ass off, as I watched it roll away from me. It was typical Africa. After traveling to 26 African countries now , I've learned that nothing ever happens as you expect it to happen in Africa. Nothing goes smoothly.

If I was back home in the USA, the truck breaking down, rolling out of control down a hill, and crashing, would mean the tour is over, here in Africa, it is only a minor delay. And a hour and a half later, the driver had the truck towed out of the ditch and started again, and I jumped back in with the four other passengers my my group and two french tourists and was off.

One of the things I love about game drives, is that risk of danger. You are never completely safe in safari vehicles, even in eastern Africa, where they take you on game drives in nice land rovers, with comfortable seats. I have had herds of elephants surround my truck and have huge males, threaten to flip us over, lions walk right up to the sides, and could easily jump right into the open top, and a three foot high tsunami, caused by stampeding hippos, in a small pond, wash through our truck.

Trying to make up for lost time the driver, raced the setting sun, our bench sliding back and fourth around every sharp turn, trying to find the forest elephants which spend the day in the forest, but come out into the open from the forests, just before sunset.

As we came up to another big hill in the middle of the park, I sat in the back of the truck mentally giving the truck some encouragement, as we started to slow up the hill, but again the truck stalled. This time all the passengers jumped from it, just in time to watch the driver head off backwards down the hill out of control again, gaining speed, heading down into a ditch, back onto the road again, but managing to keep it on the road this time.

I completely lost it, laughing so hard, tears in my eyes, I could barely photograph the truck heading back wards down the hill. All I could think of was the scene in the movie, "Gods Must Be Crazy," where a safari guide swears chasing is safari vehicle down a hill. Once again we waited for the truck to start and climb back up the hill to us. And yet again we jumped back in.
Even though we only got half the time in the park, we still got up close to 6 forest elephants, each time jumping out of the vehicle and walking closer to them, something you would never do in eastern Africa parks. One had massive tusks that almost touched the ground, which made me happy, because I finally got to photograph a forest elephant in western Africa. Something I was hoping to do during my trip.

On the way out of the park, and in complete darkness we raced a massive thunderstorm, coming in from the south. It felt like the movie Jurassic Park, where the jeep races through the night in a thunderstorm, but with out a huge T-Rex on our ass.

The next day, finding out that the truck was out of service. I choose to hire a guide to hike me back into the park on foot and explore the rain forest for a full day. We had better luck with wildlife, we came upon a variety of monkeys, a forest elephant, a heard of buffalo, a troop of over 100 mandrills,( look almost identical to drill monkeys, except have a more colorful face) an aggressive black scorpion, a few dikars, just missed a massive gorilla, and came within 20 feet of three surprised chimps, who took off through the trees.

Give Lope a few years to figure itself out and I see the place growing into a world renown park.
Posted by Beyond Adventure at 1:21 AM