Ebb and Flood of Life 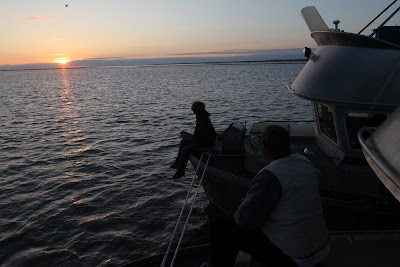 At the moment I'm anchored up in Egegik Bay, where freshwater from Bacherof Lake on the Alaska Penisula, travels down the Egegik River and meets the Bering Sea.

It's June 18th, and nearly midnight, yet there is still daylight. A gift being so far north, is the days seem to last forever. But when you are sitting on an anchored boat, with not much room and nothing to do, and all the time in the world to wait, the gift of endless dull days, is like opening the same present over and over and over and over. Even the clock seems to tick backwards.

It's crappy out, fog hangs low in the air, the sky and land is a dull colorless canvas. Nothing stimulating for the senses, other than watching the ocean drain from around you, in the out going ebb. Even the seals that are hauled out on the sand bar, seem bored. 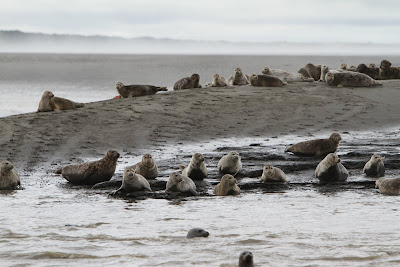 To break up the boredom, you find yourself reading through books like your about to compete in a battle of the books competition. At the moment I'm reading a book called Discarded Science, "Ideas that seemed good at the time." It's full of wacky theories man once had that now looks pretty ignorant.

I tell this to my other deck hand, who is scanning through a stack of playboy magazines, and "not" reading the articles. He responds, "good, then we aren't the only bored and sexually deprived fishermen in this galaxy."

It's not always dull out in the Bering Sea. Last night the sun set, over the crystal clear sky and dunked into the Bering Sea with a green splash. An atmospheric phenomenon, I had never seen before, and wish I had captured with my camera. Tonight, is the flip side, it's as if the world is hidden behind a filter, blocking out any color.

We aren't fishing yet, since it's still early in the season,the huge run of salmon is absent, still swimming their long journey home. So we have nothing to do but wait, and let our anticipation for the upcoming season eat on us, like 9 year olds the night before Christmas. 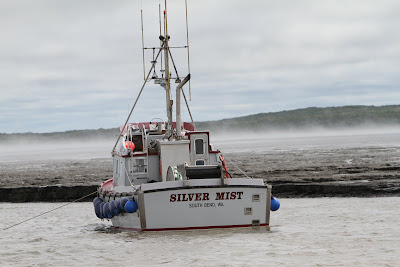 In the coming days or weeks, the salmon will hopefully arrive in the millions, in the incoming tide. All run on an inate biological clock, that reminds them that their life in the ocean is over and it's time to return to the fresh water.

When the salmon arrive you no longer have time to do anything but work. The sleep bandits, arrive and for the next five weeks they steal your life. "A rising tide not only lifts all boats," it fills fisherman's nets.

All the boats anchored and lifeless at the moment, like we are, will be fighting for room to set out their nets, running their gear, and workin the district lines as hard as they can, 24 hours a day 7 days a week. Through huge storms, and freezing cold weather. Around July 4th, we not only celebrate Independence Day, we are in the climax of the run which ususally lasts for the next 2 weeks.

Commercial fishinig in Bristol Bay is more like destruction derby for cars. You have to fight for everything you catch, it's actually really entertaining to watch and will probably have a reality show about it someday as well. Boats ram into eachother, set nets over eachothers nets, and get nets and line wrapped up in their propellers.

At the end of the season, life slows down again as fisherman head back to port and home to their normal lives. Some will have a great season and some will have a shitty season. But since we aren't fishing at the moment our lives slow, slow, slow, down to the natural rhythm of the ocean. That's the ebb and flood of life.
Posted by Beyond Adventure at 2:32 PM