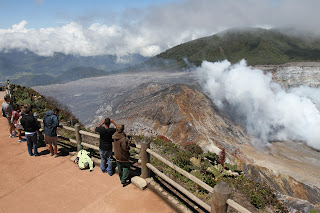 Not far from San Jose lies an active crater, called Volcano Poas, that is so cool to look at that it doesn't seem real.  It's a huge crater,  with a jade colored crater lake, and white puffy steam rising from it.  Surrounding the destruction from recent lava flows, is a lush rain forest.

Similar to Masaya Volcano in Nicaragua, you can walk right up to the crater edge and look down into a smoking fuse.  But that's where the similarities end.   Masaya really looks like the gates of hell,  with it's polychrome ash, dry surroundings with no vegetation,  and belting gases, that burn your eyes and throat.  Poas looks more like a open mine gravel pit, with a colorful lake, dug into a lush rain forest.

Just getting to Poas National Park, is worth the journey.  The view along the drive is amazing.   If you have a rental car, then it's even more fun, speeding along the windy road, in a manual.   As the crow flies, it's not very far from the metropolis of San Jose, Costa Rica, but you feel far away, since the road seems to keep climbing into the clouds and takes you along a million s turns.   Along the way passing beautiful houses,  farms, and coffee plantations.

As I drove my rental car up from San Jose, I could see a cloud layer at the top.  But not having to hike to the top like I did on Conception, I was going to wait all day at the top, if I had to, to see it clear.  I had seen pictures of  Poas and wasn't going to leave Costa Rica till I photographed it.

After parking my car,  I  hiked up the short path to what looked a viewpoint of the crater.  But it was more like looking at a white curtain.  I was a little disappointed.  The clouds were so thick I wasn't sure if it would ever clear. You couldn't see ten feet in front of you. But I was determined to photograph this volcanic crater, so I found a nice place to sit and I just waited.

I learned from my mistake on Conception that patience gets rewarded.  And so there I was, tripod and camera ready, waiting for the crater to clear,  like some paparazzi, waiting for Brad and Angelina to show up.

Finally, I was watching a lone German standing at the edge,  looking out at the clouds. He walked back and forth with a frustrated, "this can't happen. I must see this crater." Look to his face.  The volcano gods must have felt more sorry for him then me, because I could tell by the sounds he started to make that his wish was granted.   Ah..... aaahhahhhh...... ahhhhhhhhhhhh...... I couldn't tell what he was saying, but by his little dance, I knew the crater must be clearing. Either that or he had ants in his pants.

So I got up from seat  and walked to the edge.  Sure enough, you could now just make out the crater lake at the bottom.  Even that much was exciting, since up till then I might as well sat close to a TV and stared at the static snow on the screen.

It took less than five seconds, and the whole crater was clear, as if curtains were pulled back from a show.   The German yelled to his friends who were walking slowly up the path, but now were in a full out run.   I snapped a few pics, seeing the next clouds blowing in.   Those who managed to see left happy, those to slow to make it were  disappointed.

Once again, all you could see was a blank canvas.  I sat and waited, and watch the same rhythm.   A crowd showed up looked around disappointed and then left.  I told a few people that it was just clear, so they hung around.

This time it took about 20 minutes, before the crater started to take shape again.   The more clear it got, the louder people yelled.  It was entertaining.   It was no different than  a sporting event.  As the clouds cleared people cheered and  exhaled in pure euphoria. Some practically clapping in joy.   The build in drama made the view so much more interesting

For every clear crater came the incoming clouds. And the show was over.  At one point a person yelled as the clouds were closing in, "Quick, add some more quarters to the machine," Everyone laughed.

I hung around the crater for a good two hours.   Waiting for my moment to get the photograph. It's the reason I travel alone most of the time.  It allows me to take my time.    When I do capture, a great photo of something,  it's always more fun, if I had to earn it.

Finally, I got what I was hoping for and the roof lifted from the surrounding area.   Blue sky was everywhere,  and I got my photograph of the Poas Crater.   It was worth the wait. 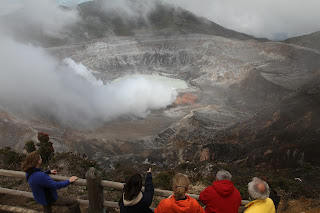 Posted by Beyond Adventure at 7:42 PM