Today I walked around the town of Luxor, photographing one of the most interesting festivals I have ever seen.  Though it was hard to watch, is was about as authentic of an experience I have ever seen.

Eid-ul-Adha ('festival of Sacrifice') is the second most important festival in the Muslim year. This year it starts on October 26th and runs for 3 days.  It is in remembrance for Prophet Ibrahim, who agreed to sacrifice his own son, when he thought Allah, instructed him to do so.  As a sign of obedience to God, Ibrahim went along with it, but just before he was to kill his own son, Allah stopped him and presented him with a lamb to sacrifice instead.

Today Muslims around the world begin the day heading to a mosque dressed in their finest clothing.  Later they begin sacrificing cows, sheep, and goats as a remembrance to this occasion.  After butchering them, everyone joins in a big feast.  No one is supposed to go hungry on this day. Even the poor are given a third of the animal. 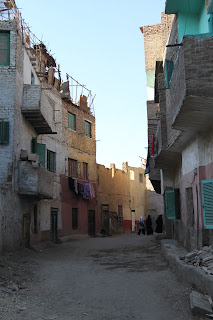 While in countries such as England and the USA, the butchering must be done at a slaughterhouse. In most Arab countries,  they slaughter the animal in the streets outside their homes.   So many animals are killed that the streets actually run red, with blood.   For some people this might seem cruel but when you think about how most animals are treated in developed countries. Packed into small pens in the hundreds, never to taste natural grown grass or get to wonder about free,  these animals have a great life.

The day began early for me, as prayer coming from the mosque next to my hotel, was louder and longer than normal.  I got up and began walking around meeting the locals.  I witnessed the festival two years ago in Morocco. In a beautiful photogenic mountain town.  They were more private about the sacrifice and most instructed me to leave  or not take photos.  But in Luxor, the families were happy to invite me to stay and photograph and video the slaughtering.   Some even invited me into their homes for lunch. 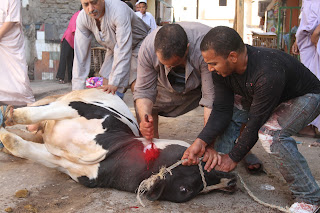 Any other time, watching a big animal like a cow get it's throat slashed open and bled to death, in the middle of a dirty street, would be hard to watch.  But watching  how important this meant to the entire family, kept things in perspective.  This festival was more than just a feast, it's foundation is to help charities and to help feed the poor.  Even the stray dogs and cats get to feast on left over bones and scraps.

It didn't take much effort for the butcher to kill the sheep, most could be carried over the persons shoulders and then just killed in one cut of the knife.  But the huge bulls, tied up outside houses were more difficult and went down with a fight. It took a team effort. 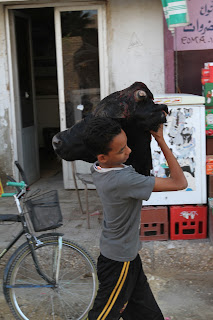 When it came time to kill them.   Their front legs were tied together which with some effort knocked them off their feet.   Most of the time it went smooth, other times it looked as if the bull was going to get loose and run free. When the bull, fell over, a group of men jumped and pinned the bull down and slit it's throat, blood spurting  from it's  major arteries and gushing out into the streets. It's amazing how much blood comes from these animals.  The animal struggled for a few minutes, but died relatively quickly.  Even the smallest children ,  seemed to have become accustomed to the tradition.

Woman don't participate in the butchering, but watch from a distance, I'm sure they will have plenty of work later on preparing the meat   Children that are old enough are asked to help with the butchering, as a bonding with the father.   Someday they will lead the butcher of the family animal. 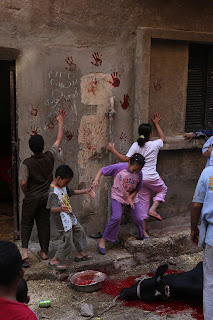 After killing the animal, there was often a blood fight, where people rubbed blood in the face of others.  Non of it was taken serious, but met with laughs like a water fight.   The locals also dipped their hands into the pools of blood and made bloody hand prints all over the street walls.  Making sure all five fingers were visible.  Until the streets were covered in bloody hands, like some elementary school was doing an art project with red finger paint.   I was told it was for good luck.

Everywhere I walked animals were being sacrificed.  As soon one was done being butchered, I walked down the street to the neighbors to watch them butcher another. Usually each animal was butchered by a different man.   By the time they were done, their clothes were covered in blood.  I got some interesting photos of these butchers. Most were wearing their traditional Islamic clothing.  Some with blood splattered all over their face.

I witnessed so much death that, eventually I had to go back to my hotel room to take a break from the smell of blood, warm meat, smelly insides, and swarms of flies.  On the way I had to walk around pools of blood.  Outside each house, where once stood a sheep or cow tied up in the morning when I walked past,  was only a huge pool of blood.

Western society tends to keep certain things covered behind closed doors.   Watching a living animal get killed isn't fun, but anyone who enjoys meat must realize someone has to kill it. 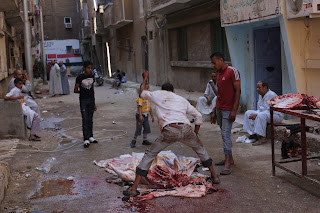 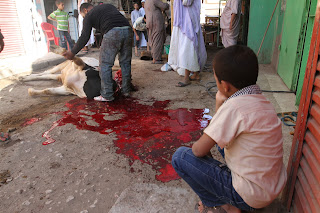 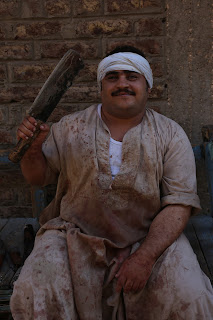 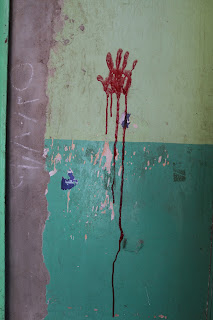 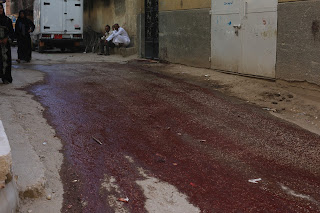 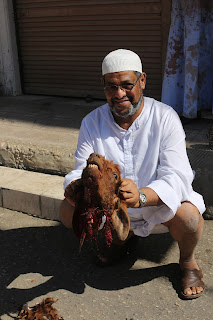 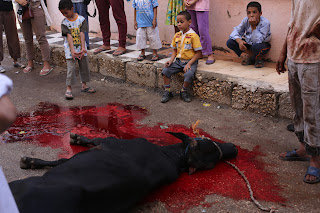 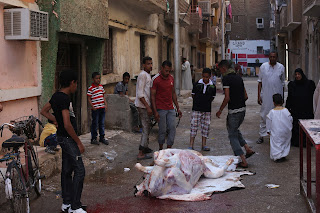 Posted by Beyond Adventure at 10:07 AM