Getting Arrested in Bamako, Mali

When traveling through any third world country as a westerner, you have to expect shit to happen. Just last night I was talking to a older couple from England and South Africa who have been traveling to Cape Town as well. On their way into Bamako they were pulled over by police and ordered to pay 75,000 Central African Francs for failing to stop at some tourist information center entering town. The officer pulled them over by riding a motorbike up next to them and blowing a whistle. In a world where people are dangerous and you can't trust anyone they thought at first they were going to be robbed so didn't pull over. 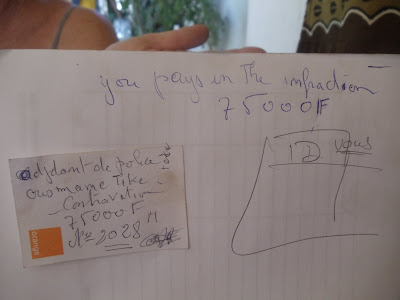 Earlier in the trip they were ordered to pay money for not stopping at a rail road crossing, which hadn't had a train cross it in years, the sign all rusted, the tracks overgrown with vegitation. Our driver in Morocco was pulled over by a police check, who told him he was speeding. When he asked for the officers to show him the speed limit sign, they refused and said you pay 200 Dirham. Our driver said show me the sign of the speed limit then. The other officer then said, "ok just pay 100 then." Our driver having experience with Africa, kept negotiating till they said,"ok you can go, have a nice day."

My experience didn't cost me any money, but it could have gone south quick. It happened with me walking around town with a few people. The town of Bamako is probably the largest and craziest town we have visted yet. So luckily, I decided not to take my professional camera with me, hearing about people being mugged. Capital cities are very dangerous. I had a friend mugged twice in five minutes, while our group was in Nairobi,Kenya two years ago. The only camera I had with me was my point and shoot, that I use to take photos for my blog. I figured if there was anything to take a photo of, I at least had that with me. Doesn't really take very good pics anyways, so not too worried about it being taken. We wondered around town for a while checking out different markets, nothing was interesting enough to actually take a photo of. I did shoot some video of the traffic.


While walking town a street I had this huge guy in street clothes walk up behind me and grab my camera and try and rip it from my hand. Being a commercial fisherman my hands are super strong, so my hand locked around it like a vice grip. To his fail and all his might he couldn't get the camera out of my hand. Thinking he was a guy trying to rip me off, I pulled my camera away and continued walking. Pissing him off more he grabbed my arm and pulled me around, I got into his face and pulled away again, thinking now this guy was getting violent. He continued to grab my camera, this time with both hands trying to tear it from my grip. A crowd started to gather around us, as he yelled at me in French, which I don't know. More and more people gathered till we had a large crowd and traffic stopped. He then pulled out his wallet and showed me and the others, a fake looking card that said Police. Still not believing him that he was an actuall police officer, I tried to walk away, knowing it's common to fake being a Police officer, to rip off tourists. He continued holding me back and I kept acting like I would if someone was trying to rip me off.

I asked the locals who this guy was and they said, he was an actual police officer. So I backed down. The locals all started arguing with the officer on my behalf and things began to become heated. Wanting to get away from the mob, the officer then orderd me up the street to the police station, where I was happy to go, because I wasn't still 100 percent sure he was an officer, since he was in street clothes. One of the locals who was drawn to the argument, knew enough English, to tell me the some people complained that you took a picture of some people, without asking permission, and now he wants to arrest you.

Inside the police station, the officer argued something to the main officer in charge about what I did. The local who spoke English staying with me, like a lawyer and translator, argued on my behalf. At this point I still didn't know what was really going on, because I never took a picture of anyone. but they kept telling me that I broke some rule about taking pictures of people without permission. Which I have done a thousand times in Africa, except this day.
I tried to tell them to turn my camera on to prove it, but the officer refused.

African's love to argue, so this went on for a long time. Not sure what they were talking about. Eventually my camera battery died, since they didn't turn it off. At the time we all thought it had gotten broken. Which I think helped in my behalf, because I have thousands of photos on it. Many pics of African's I didn't ask permission to photograph because they always demand money when you do. I'm sure every tourist is guilty of this. So I just sat their while they explained how it was against the law to photograph people in Mali without them knowing. I agreed, made my arguement but knew it didn't matter. They just yelled back and fourth. Not knowing what was going to happen.

Eventually they let me go. Shook my hand. I got the hell out of there. The nice guy who backed me up, said he wanted tourists to have a good time in Mali. He loved his country. I gave him a hand shake. He didn't even ask for money. When I got home I charged my battery hoping my camera wasn't broken. To my luck it wasn't. I didn't have pictures of anyone in the market. Only a video of traffic. While writing this another guy on the trip, came up to me with a beer and said sorry I think it was me who took the pic.
Posted by Beyond Adventure at 6:18 AM