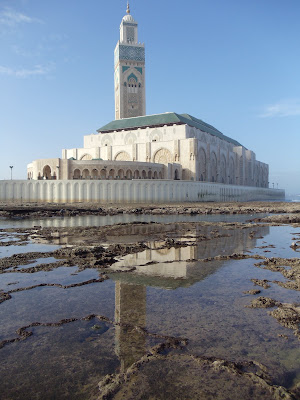 The second week of my trans-African trip has taken me from the coastal towns of Rabat and Casablanca, inland to the roman ruins of Volubilis, away from "crazy Muhammod" and his druken rants at our bush camp, over the high peaks of the Atlas mountains and along it's rain shadow, deep into some canyons, and back over the Atlas mountains, to the touristy town of Marrakech. I like big cities, but get sick of the smell of burning trash and shit in the streets, having to frogger your way across busy streets, and avoid getting run over by every mode of transportation possible. The past week it was nice being away from all that and finally bush camp out in the desert. I wasn't impressed by Casablanca, haven't seen the movie but I heard it was a romance classic. Things must have been different in the 1930's.
I've been impressed by Marrakech so far. It is a bit more of a tourist town, but because of that the streets around the main square are cleaner. At the moment I have found a nice cafe with a great lookout to watch the madness go on, below in the square. It's like a people watchers heaven. Like having a car, bike, motorcyle, and horse race, all at the same time, and then choking the course with pedestrians donkeys, carts, and shops. Forget American football, this is entertainment. I'll try and explain what's happening.
It's a sunny day, normal madness in the square. Beggers on the prawl, guys ready to pick pocket you somewhere out there, street performers in full outfit, crowds gathering around different performances. Mule drawn cart overloaded with fruit makes it's way through the square, makes it past the speeding truck, around the old man barely getting out of the way ......oooooohhhh almost broad sided by three guys on one scooter. Traffic backs up causing some other bikers to try and be heros, almost going head on into the next truck overloaded with stuff, coming the opposite way. No one even seems to care that they almost wrecked.
Next a single white tourist with fanny pack makes her way across the square, like a baby caribou seperated from the herd, predators move in from all directions. Older men with hands out, begs for money, people in markets scream out trying to attract her into their market like a trap door spider, "my friend, come, to look is free", a snake charmer captures her attention for a moment, "5 Dhuram for nice picture of snake", she hesitates to photograph the king cobra but after watching the assholes kick around the pile of snakes trying to get them to strike, she continues. But forgets to pay for the photo he follows after her demaning money.
Next, a group of tourists make there way through the crowd like buffalo, using the safety in numbers approach, heads down moving fast. The predators come in packs, three guys with monekys on leash try their luck, guess the back flip the moneky did wasn't impressive enough, the group ignores the monkeys and pushes on. Two guys from the market holding necklesses rush out to greet them, oh they get by them as well, four darker skinned people in local dress start beating drums around them, they ignore them, one last challenge, ahead lies the old crippled lady............ and they make it. Good move, wish I could see that in instant reply.

Next, two stray dogs now enter the square avoiding traffic, avoiding the donkey cart with a very beaten down, depressed looking donkey, they meander there way around performances, make there way through the crowd to the middle of the square, they sniff around probably looking for scraps, they could be rabid could have flees noone knows . I get distracted by a old white man yelling at the snake charmer because he just threw the snake over his shoulders, with out him wanting it. He points his fingers yells something, then stomps off with his wife.
Now back to the dogs, still moving through square. One stops.......squats and takes a huge dump right in the middle of the square and no one seems to care. Yes, the great city life of a third world country.
Seriously, you could spend hours watching the madness, which I plan on doing. It's even more fun walking through it. It's better than the shit back home that's on tv.
Things do calm down a bit at night. It's too cold for the snakes so they disappear. The square makes a transition like a play changing it's back drop, from performances and selling cheap stuff to setting up for dinner. The food in the market is excellent. Just make your way down the different stands selling food and try not to get annoyed by every owner trying to persuade you to eat at their place. If you feel brave, try the sheep's balls. I definetly wasn't feeling that brave.
Yes, It's traveling at it's best. If you hate being harassed this isn't the country for you. But if you like to haggle and like seeing a culture way different than back home, you will love it. The shopping is amazing. I definetly recommend Marrakech.

Heading over a pass on the Atlas mountains The Atlas mountains are high enough to have snow on them, some more than 3,000 meters high. A few ski resorts are scattered about. Because the Atlas Mountains are the higheste mountain range in Northern Africa it creates a rain shadow for eastern Morocco. Eastern Morrocco reminds me of a mix of southern Utah and death valley in California. 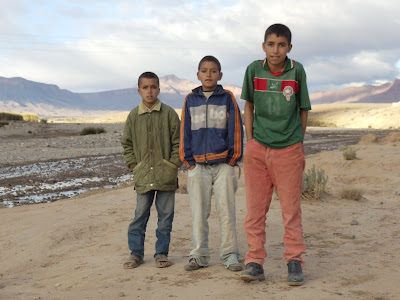 Local kids using us as television 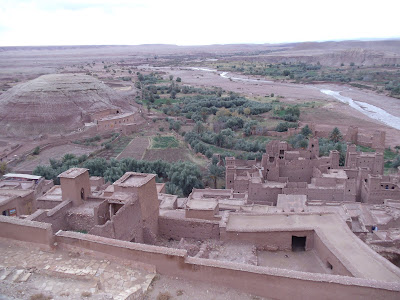 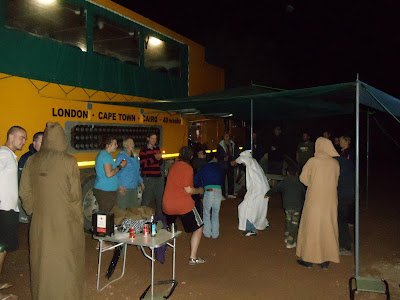 Dance party with some locals. 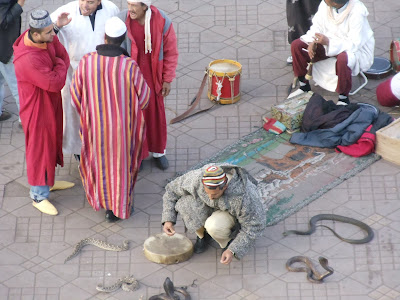 Cheering on the snakes to bite the snake charmer. I seriously was annoyed with these guys, wanted to go smack them around. They tossed and kicked around these snakes like toys.

Best view is from the top of the truck as you travel down the road. 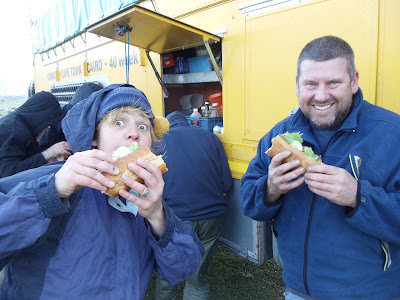 Our driver and tour leader enjoying lunch in the rain. 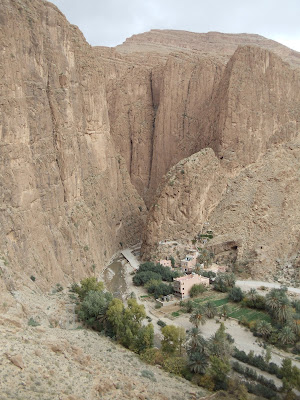 Main Square in Marrakech, before Sunet.

The Grand Mosque in Cassablanca. 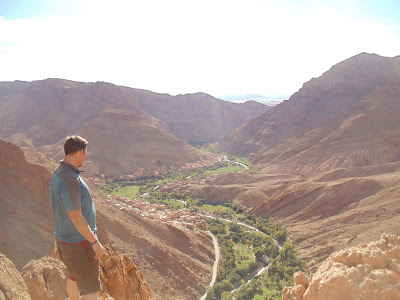 Hiking in the mountains. 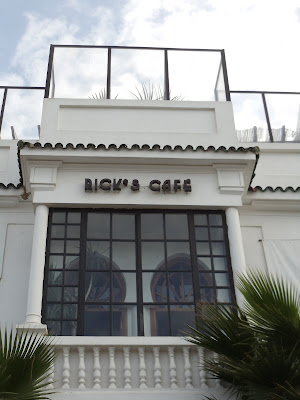 Rick's Cafe. Made Famous in the movie Cassablanca. There are lots of these Cafe's in town claming to be the real one. Like Ray's pizza in NY
Posted by Beyond Adventure at 8:24 AM