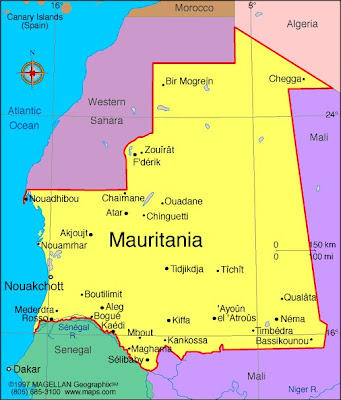 View Link for photos of Mauritania 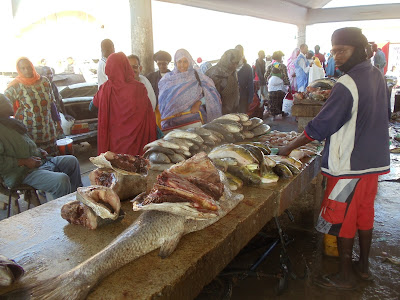 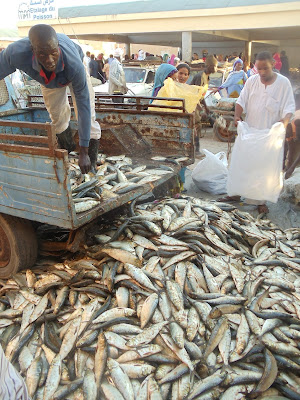 From the moment I entered Mauritania, I could tell I was crossing into central Africa. Islam is still the most popular religion, but you started to see a change in the clothing style, as well as a change from Arabs dominating the population to black Africans. Nouahdibou was the first town we ducked into. Didn't see much of it, just spent the night, before getting up early to make the dash to Nouakchott. Nouahdibou a port town on the west coat near the border, extending out into a cape. I didn't get time to photograph them, but I was excited to learn that 100 extremely rare monk seals are protected at the tip of the cape.

We originally were going to be forced to fly from Nouahdibou to Nouakchatt, because of the stretch of road leading to Nouakchatt was too dangerous, but our flights were canecelled so were left no option, then to make the dash,which I was stoked about, since I didn't want to have to fly any sections of the trans-Africa trip. The drive wasn't the most stunning, some interesting villages spotted along the road. Other than than just mile after mile of more sand. I did get some cool shots of sand blowing over the road that looked like a snow blizard back home.

Nouakchatt is a town originally built for 50,000 people, but now has grown to a million. It is the capital of Mauritania, lying along the coast. If you vist there, there are two things you have to visit, Ali Baba Burger, Mauritania's version of fastfood and the fish market. Ali Baba Burger puts to shame a big mac. Two beef patties, egg, fries, all stuffed into a fresh bun. Yum! People just drive up and yell into the shop,just like a fast foot restaurant back home.

The other interesting part of Nouakchatt was the fish market. So much was going on at the market, that I actually had to just put my camera down and watch for a while to get a sense of what I was photographing. Everywhere I looked was an amazing photographic to be taken, but so much action was going on I was over whelmed, at where I should point my lens. Like a Navy, fishermen returned, after five days at sea, in small wood boats, beautifully decorated and colored, to deliver their catch. So many were returning at once, it could only be discribed as a actual navy trying to make a beach landing, before invated inland. Once they rammed their way up on the beach, they used teamwork to haul their heavy boats, away from the crashing surf. Then the locals ran up to buy the catch.

The market was overflowing with the days catch, fish of all sizes and types were being sold. Some I have never seen before. Locals crowded around yelling and demanding what they wanted. Fish being kicked from the back of trucks, shoveled into baskets, thrown across to waiting arms. It made Pike's Market in downtown Seattle, Washington, (famous for their fish throwing) look like a fun game of catch in the back yard,compared to a big league baseball game. It was the most photographic place, since I wondered the streets of the Medina in Fes, Morocco. And without doubt a place you must visit if you ever travel to Nouakchatt. I would have loved to have spent a few days photographing it, since so much was going on. Be prepared to get alot of attention when you bring your camera out. You learn to be secret taking pics, because if any see you taking pics they turn their back, yell at you, or demand money. It's a frustrating game, but after a while you just laugh and play along with them.

After two nights In Nouakchott, we headed south to Senegal, bush camping near the border and having armed guards protect us while we camped. Good thing we had them because when ever we stop, we draw lots of attention. Since this was a border town we couldn't find a place to tuck away from view. Instead of crossing the border at the main border crossing we heading along the Senegal River and crossed into Senegal from a much less used border crossing. Bribary is a way of life on this continent so by going to a less used border crossing we got across much faster. A secret learned from our driver. It allowed us to pass through Diawling National park as well, known for it's bird life and Worthogs. It was good to finally see some wild animals after only seeing a few monkeys along the first month of the trip. I have never before seen people more excited to see a worthog From there we drove to the beach and now am spending the next three days camping on the beach. It's nice to finally spend some time swimming and bodysurfing in the Ocean. The beaches aren't the most photogenic, littered with junk and wood, but noone else is around for miles. I am currently sitttng, in some building in St.Louis.

View Link for photos of Mauritania 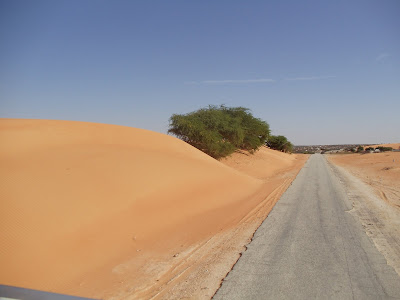 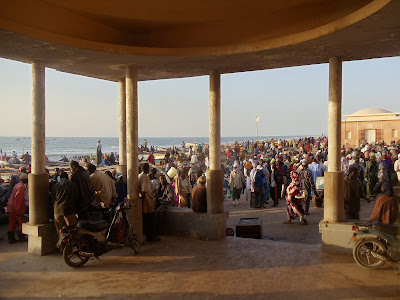 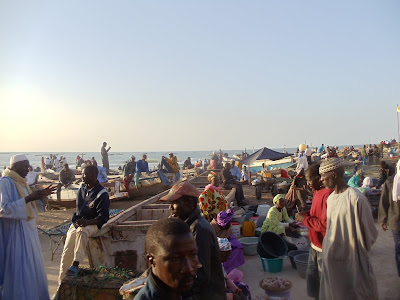 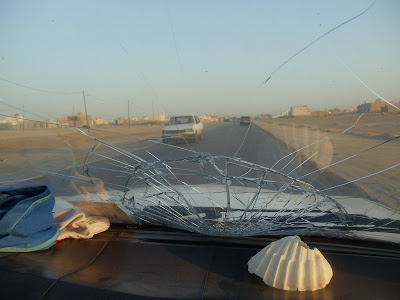 View from our Taxi. Fun part of traveling is experiencing the local transportation. It's like a game Russian Roulette. Cram as many as they can into one vehicle then race down the street, like some mad man. While very entertaining, their vehicles display just how hard they ride them. 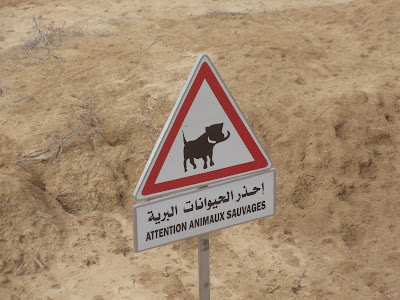 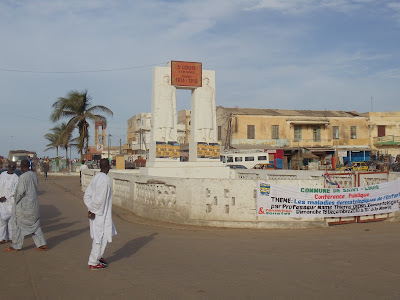 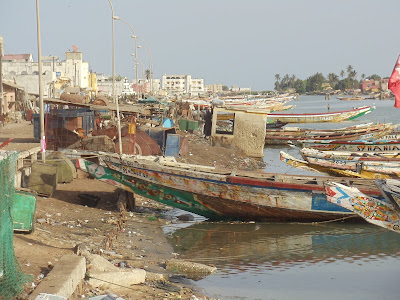 Posted by Beyond Adventure at 12:39 AM