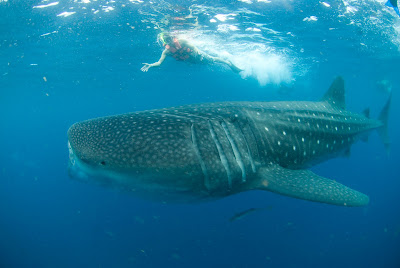 The town of Tofo, Mozambique, is famous for having possibly the largest number of whale sharks and manta rays in the world. The bay attracts a large number that feed in the area. If you time your stay during the peak summer months, you will almost be guaranteed to see them. A large number of jouvinile sharks, call the area home year round, so no matter what time of year, you have a chance of seeing them.

Whale sharks are the largest shark species, reaching over 30 feet long. While completely harmless, like whales, they feed on plankton and are nothing more than a spotted vaccum, with a sharks body.

You can't visit Tofo without heading out, to try and snorkle with the whale sharks. It's one of those experiences that will hopefully leave you with an amazing close up encounter and make you appreciate nature even more. These sharks are a safe ambassador for a species with a bad reputation, and a fading future. Some species won't last past this decade.

The morning I went out to dive with whale sharks, started out interesting. Killing sometime, before meeting the company I was going out diving with, I went body surfing in the warm Indian Ocean.

I swam out into the break, and caught a few nice waves. After riding a wave into the beach, and wading back into the surf, to catch another, I heard a girl yelling to me from a balcony in a restaurant atop a hill.

At first i thought she was messing around, but she was freaking out, and more and more people started gathering on the balcony and pointing out to where I was just swimming.

I could hear the words shark and fin, and her hands shaking up and down in panic. Not the two things, you like to hear when you are in the water. I looked around me to see if I could see the dark shape, even dove under the water with my eyes open, but couldn't see anything. So I made my way out of the water.

More and more people were gathering on the balcony and saying there was a shark in the surf. But from my angle I couldn't see it. Curiosity made me want to grab my mask and go snorkling, but luckily the captain and group I was heading out with, came walking down the beach at that time, so I helped them push the boat into the surf. Watching for any dark shapes, before jumping in.

Aboard I asked if we could check it out, but the captain wasn't interested. Like a kid being led away from a candy store, I could only glance at the water as we raced off the other way, only guessing what shark was in the water. He told me that sharks are sometimes seen along the coast, even great whites

It didn't take long to spot a group of dolphins. Our captain got infront of them and we all jumped in. Sucking in a deep breath, I dove deep to follow them for a few minutes. I could hear their clicking sounds under water. They were in no hurry to get away from me, but they stayed deep so weren't interested in playing with a group of people.

Everytime I went back to the surface, I tried to point out where the dolphins were to the other passangers. Most were still trying to get the water out of their masks and figure out how to use their snorkle. Non of them even saw the dolphins.

With everyone aboard, we were off again, zig zagging our way up the coast, like Navy Seals, in rough seas, splashing us in the open boat, every wave we crash into. It was hard to spot anything in the water, with a windy cloudy sky, that made the water dark. Terrible conditions for spotting whale sharks, but it made it fun riding the boat as is jumped ocean swells.

I scanned the surface hoping to see the fin of a whale shark breaking the surface. You only get 2 hours on the boat, so time was ticking. It would have been disappointing visiting mozambique and not seeing a whale shark. I was told it was not the peak season, so nothing was guaranteed. groups had gone out earlier and didn't see anything.

About 30 minutes into the trip, my excitement soared as I spotted the shape of a medium sized whale shark, about 18-20 feet long, swimming near the surface, right towards our boat. I didn't wait for the call to jump in, I was already heading backwards over the side, like a scuba diver. I've never been good with following directions.

When the bubbles cleared, I found myself face to face with the largest shark I have ever seen. One that made the great whites I have photographed look small, in comparison.

The famous spots were clearly visable, with it's huge mouth and long tail, it slowly moved past me, like an organic submarine. As it swam by the side of the boat, I jumped from, the group all started jumping into the water, like people jumping from a burning sinking ship.

Noone even bothered to look, where they were jumping, three managed to land on the shark, one girl actually sat on top for a few seconds, moving through the water. It was frustrating to watch.

The shark paniced from all the people now surrounding the poor thing, cutting off his path. He started thrashing his tail, trying to turn around and get away from the splashing people, screaming through their snorkle, at the sight of a face to face encounter with a shark.

Leaving the splashing crowd behind agian, I followed the whale shark, as it dove about 20 feet below the surface. I had a one on one experience, for about 10 mintues. After surfacing every minute or so, to exhale and take another deep breath, I dove down to cruise along with the whale shark, his body dwarfing my size.

It was the most impressive sight I have seen while snorkling in the ocean, since I was scuba diving in hawaii and kicked along a rare gigantic sea turtle that was the size of a WV bug, and close to 200 years old. With my arms streched out as far as they could go, I barely could touch both sides of the shell on it's back, it's head was massive. The turtle didn't care that he was pulling me through the water, with me holding on.

Above me I could see boats racing in from all directions to get their clients ahead of the whale shark, with the shark deep noone knew where it was, so people were jumping in all around us, like charges from a destroyer, being sent over board to blow up a submarine.

It was the most annoying sight I have seen since going on game drive in the Serengeti National Park, and having 12 vehicles leap frog around eachother, cutting eachother off,heading off road, and almost running into the lion, trying to get thier clients close to the huge male lion.

Three days prior, I was cage diving with great white sharks, in the white shark captial of the world, Hansibaai, South Africa. It was a similar experience, since you have 8 boats racing out to anchor up next to Dyer Island. Twenty five to fourty five people in a boat, 8 people being stuffed in cages at one time, and sea sick passangers throwing up over the side.


With a few strong kicks the shark decided to leave me behind and he dove deep, into the darker waters. No longer being able to follow it, I headed back to the boat, which I was now a few hundred meters away.

I was told by the captain that a few weeks earlier, a great white shark surprised the guests, by making an apperience. Swam around the boat and then disappeared. So I kept my eyes out for the grey and white shape I have come familiar with, photographing great whites in three locations, around the world, farallon Islands, off california, Seal Island, in south Africa, and Dyer Island ,South Africa.

As much as I would love to view a great white from outside a cage, kicking back to the boat alone at the surface made me look more like seal, so I wasn't really wanting to see one. While I only saw one whale shark that day, it was still an amazing enough experience. One I hope everyone gets to experience someday, before the biggest shark in the ocean is put into extinction.
Posted by Beyond Adventure at 2:23 PM